International programme "The Smallest Gold Coins of the World. History of Gold" 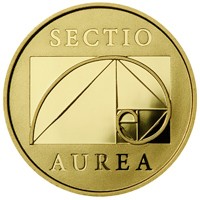 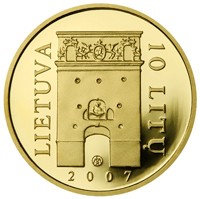 The obverse of the coin features one of the most significant historical and architectural monuments of Vilnius—Aušros Vartai—which reflects the proportions of the golden mean. The attic of Aušros Vartai features Vytis, the symbol on the Coat of Arms of the Republic of Lithuania. The inscriptions LIETUVA (Lithuania), 10 LITŲ (10 litas) and 2007 are arranged in a circle around it.

The reverse of the coin features the formula of the principle—the golden section (Sectio Aurea)—used in architecture from antiquity, which is expressed in a geometrical figure—the rectangle. The golden section, which represents the principle of a perfect division of a line into two segments so that the ratio of the whole to the larger part is the same as the ratio of the larger part to the smaller, was considered an aesthetically perfect, or golden, proportion. In Renaissance, this formula, used in architecture, was applied to the proportions of the portrayal of a human figure, the composition of art works, etc. The figure is encircled with the inscription SECTIO AUREA.

The coin was awarded at the international numismatic exhibition Vicenza Numismatica held at Vicenza, Nord Italy, in 2008. Special recognition from the National Committee, commemorating the 5th Centenary of the birth of Andrea Palladio (1508–1580), was awarded to Lithuania for having chosen a geometric representation of the golden section that was the background of every architectural proportion in the works by Andrea Palladio.