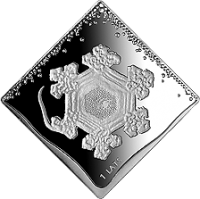 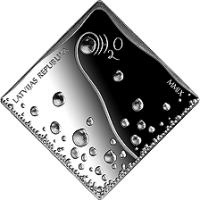 A water crystal is depicted in the centre of the coin, with the inscription 1 LATS placed along the lower part of the right lower side of the coin.

Water (H2O) is the basic element of every form of life known to man. It is the cradle of life and one of the main prerequisites for life to emerge. Water covers ¾ of the Earth's surface, and nowadays mankind uses annually approximately 4 000 km³ or 44% of all perpetually moving water. On average, 900 litres of water are used daily to satisfy the needs of each inhabitant of the planet. At the same time, the majority of people constantly suffer from fresh water shortages. High-quality water is becoming an ever greater value.

Water has always been a decisive factor in the history of mankind. All the ancient civilisations - Mesopotamia, Ancient Egypt, Mohenjo-Daro Civilisation of the Indus Valley, Huang He and Yangtze River Civilisations in Ancient China - flourished along the rivers which irrigated lands and quenched people's thirst. The rise of Ancient Greece and Rome, the basis of modern Western civilisation, is linked to the Mediterranean Sea. By conquering the world's waterways, the Vikings prospered, the Hanseatic League flourished, and Columbus discovered the Americas.

The chemical, physical and technological properties of water and its economic and ecological importance mean that human history has constantly been enclosed in water waves. Empedocles (487-424 BC), a Greek philosopher, medical man and poet, in his poem "On Nature" described water as one of the four classical basic elements of the Universe besides air, fire, and earth. In traditional Chinese philosophy, water is among the five basic elements along with earth, fire, wood, and metal.

Water is the means and a symbol of purification in all great world religions and mythologies. It is the basic sacrament in Christianity; by being immersed in water, i.e. being baptised, a person is united with the Church. Ritual washing is not only a confirmation of faith but also a sign of washing away the sins. For Christians, the Jordan River is of great importance - in its waters Jesus was baptised by John the Baptist. Muslims consider the Zamzam Spring of Mecca sacred, and Hindu people venerate the Ganges River. For Latvians, the Daugava is their River of Destiny.

Great music (for instance, Water Music by Georg Friedrich Handel) and paintings (Dutch marine painters, Ivan Aivazovsky, William Turner, and Eduards Kalnins portrayed the magic of water in their works) have been dedicated to the mighty element which can be both destructive and life-giving.

Water, to think only of Roman thermal baths, saunas, aqua parks, dolphinariums, oceanariums and water sports, has always been a source of health and joy. The sun, air, and water lie at the foundation of a healthy lifestyle, helping people feel one with the nature and bringing harmony to the stressful run of modern life. Water's special role was celebrated by the World Water Forum in Istanbul in March 2009.

The Bank of Latvia has dedicated a special coin to water designed by artist Ilmars Blumbergs. The obverse of the coin depicts flying water drops, and the reverse depicts an ice crystal. According to the research by Masaru Emoto, a Japanese scientist, the shape of ice crystals depends on both purity of water and impact of sounds of music and human speech. The more harmonious the music, the more beautiful the crystal's shape is. The idea of collaboration between the human mind, which tends to organise everything and seeks exact order, and the mighty natural element is encoded in the unusual shape of the coin - a square contrasting with the subtle form of water. Man and water can truly be in divine harmony.
За период с 2012-12-29 по 2022-05-26 монета подорожала на 9%