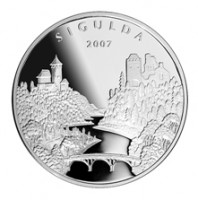 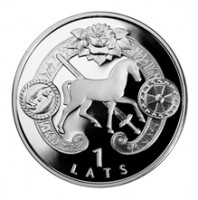 A horse stepping over the sword with the right front leg is featured in the centre. A pendant inherent to Finno-Ugrian tribes is shown on the left side and the cross symbolising Christianity on the right side of the coin. A rose is depicted in the upper part of the coin. The numeral 1 with a semi-circled inscription LATS beneath it is centred in the lower part.

The reverse of the coin features the Gauja Valley with the Turaida Castle and Sigulda Castle ruins. The inscription SIGULDA is arranged in a semicircle in the upper part of the coin, with the year 2007 below.

The 11th century is an outstanding landmark in the history of Sigulda, when the Livs, of Finno-Ugrian descent, settled near the lower reaches of the river Gauja. Legends and documents tell us about the fortified wooden castles of Satesele, Turaida and Kubesele, and about their resistance to the German crusaders.

The obverse of the coin depicts a horse - as a reminder of its special significance in the life of ancient people of Sigulda and its vicinity. A testimony to this is the horse-shaped amulets found in the burial grounds of the Livs, as well as the event recorded in the Chronicle of Henry of Livonia. In 1191 the Livs of Turaida used a horse as the Steed of Destiny: he stepped over the sword using the front leg that was supposed to symbolise life, thus saving the life of Theoderich, a Brother of the Cistercian Order, whom the Livs had decided to sacrifice to their gods. The Livs thought that perhaps the Christian God had mounted the horse and was directing his leg, so they wiped the horse's back; yet the horse again put the same leg forward testifying to God's power. The Steed of Destiny symbolises the conversion of the local tribes to Christianity and their adaptation to the West European culture.

The rose on the obverse of the coin is dedicated to the Rose of Turaida whose short life serves as proof to the power of true love. According to legend, during the Polish-Swedish War in 1601 the castle's scribe found a small girl beside a woman killed in battle. He took her home and raised her as his own. The girl was named May Rose since she was found in May and was lovely as a rose. May loved a gardener's apprentice; however, a Polish officer wanted the girl for himself. As May could not fend off the officer's advances, she chose to die.

In 1207, the Order of Swordbearers and Albert, the Bishop of Riga, divided between themselves the conquered lands of the Livs. The Order built a stone fortress SIEGEWALD (from German "the Wood of Victory") on the left bank of the Gauja, and a merchant town developed around it. In 1214, the Castle of Turaida was built for the Bishop Albert. The Gauja Valley with the Turaida Castle and Sigulda Castle ruins is depicted on the reverse.
За период с 2012-12-29 по 2023-02-04 монета подорожала на 67%