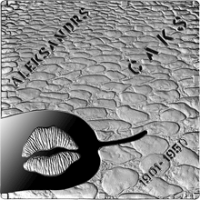 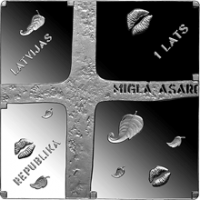 The reverse of the coin features cobble-stone paving, with the inscriptions ALEKSANDRS in the left upper and ČAKS in the right upper corner, both set slantwise. A polished image of a leaf with a dulled imprint of lips on it is placed in the left lower corner, and the slantwise upward inscription 1901–1950 is on the right.

It is hardly an exaggeration to say that Latvians are a nation of poets. In the olden days, some were even amused: a poor peasant is singing while doing back-breaking work instead of clenching his fists. This may be the reason why the number of dainas, the Latvian folksongs, about equals the number of Latvians. Latvians hardly lack in professional poets, yet there are few that are truly beloved, not just respected and honoured by the people.

It may seem unusual that at the very top of the list of favourites is not some author of uncomplicated, light verse, but the great Latvian modernist and urban poet, Aleksandrs Čaks (1901–1950). Čaks's literary heritage is multifaceted, wide ranging, and artistically brilliant. Time and again, the conservatives and dogmatists among the literary critics have taken him to task for "hooliganism", i.e. depicting the little folk, aestheticising the ugly, using contrived imagery. Yet his poetry found its way to the readers' hearts and had a powerful impact on both his contemporaries and future generations of Latvian poets, the Rigan Ojārs Vācietis and the New Yorker Linards Tauns among them. Čaks's expressive, invariably fresh sounding, rhythmically varied and professionally polished poetry always rings true and is inhabited by a variety of characters untypical for Latvian verse: Latvian riflemen, Riga street urchins, and mythical beings. His love of nature ranges from depictions of romantic cobblestones to the less than attractive cockroaches.

Many of Čaks's poems are very musical: the melody seems to be implied in the verse; many have even been entitled "song" or "ballad". Yet for some reason composers took their time to find a musical key to this image-loaded and rhythmically varied poetry. During Čaks's lifetime, some poems acquired melodies by anonymous authors, with the song "Confession" whose first line reads: "Fog mists the pane. Why go on and deny..." the most popular among them. Like the vast majority of world's songs it is about love. Čaks's contemporaries recall that his attitude towards the popularity of the song was rather reserved, yet it became a part of Latvian folk heritage. When Latvians get together at a party and, as a rule, start singing, "Confession" never leaves the core repertoire, part of its attraction being its natural sounding imagery and melancholy lyricism that avoid shallow sentiment. The song's imagery has inspired Ilmārs Blumbergs's design of the coin.
За период с 2012-12-29 по 2022-01-19 монета подорожала на 18%