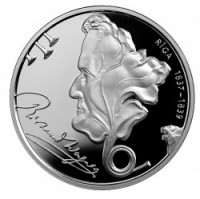 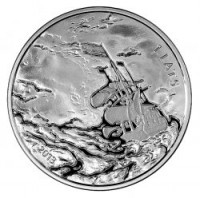 In the centre of obverse, there is a sailing ship in the billowing sea, with semi-circled inscription 1 LATS on the right and the year 2013 at bottom left.

Reverse features Richard Wagner's portrait in profile in the centre, his facsimile signature at bottom left, and a semi-circled inscription RĪGA and the years 1837–1839 on the right.

Richard Wagner (1813–1883), a genius of German music, served as main bandmaster at the Riga City Theatre from August 1837 to June 1839. After Wagner was dismissed from this post, his successor Heinrich Dorn had this to say: "There were no serious objections against him as a bandmaster, but his unmistakably artistic nature failed to conform to civic relationships as soon as they became limited by debit and credit."

On 25 June 1839, Richard Wagner conducted the last guest performance in Mitau (now Jelgava) and decided not to return to Riga where an unpaid promissory note to merchant Robert Hafferberg and a debt to the Koenigsberg merchant Schirach Sternberg, who had already launched court proceedings against Wagner harming the latter's reputation, were waiting for him. After the performance, Wagner with his wife Minna and dog Robert, under the cover of the night and fog, secretly crossed the border between Russia and Prussia to go to the Prussian port Pillau (now Baltiysk, Kaliningrad region). From there, on 19 July 1839, Wagner embarked on his sea voyage that proved an inspiration to his opera "The Flying Dutchman", during a storm reading "From the Memoirs of Herr von Schnabelewopski" by Heinrich Heine, which he had purchased in Riga.

Riga was the second city which in 1843, a few months after its Dresden premiere, saw a performance of "The Flying Dutchman". This opera was important not only to the German culture and the Baltic German circles of Riga. Wagner's youthful masterpiece was also performed in Latvian on 18 November 1918 at the solemn occasion of proclaiming Latvia's statehood, with the audience, opera choir and orchestra repeating "God, Bless Latvia!" by Baumaņu Kārlis, what was to become the Latvian national anthem, three times before the ouverture. "The Flying Dutchman" performed by the Latvian Opera became the first staging watched by the citizens of the new country the very next day.

The style of Wagner's musical dramas, where the swelling and even exaggeration of means of artistic expression became an aesthetic norm, was one of the elements that contributed to the triumph of eclecticism and art nouveau in Riga at the turn of the 20th century. The author of the grandiose scores, the most famous of the composers who spent a part of their careers in Riga, made sure to create a spectacular milieu around himself even when his material well-being was not at its best. He explained it as follows: "If anyone but guessed what luxury replaces for me, I would be considered a very modest being." As a result of his indebtedness, Wagner could not leave Paris in 1839–1842; even the success of his operas "Tannhauser" and "Lohengrin" did not bring financial security. Only the miracle of the invitation from King Ludwig II of Bavaria to come and work at his court in Munich gave Wagner the respite from debt and allowed him to fully dedicate himself to creative work.

The coin "Rihards Vāgners" issued by the Bank of Latvia is a dedication to the composer on the occasion of the 200th anniversary since his birth and a memorial to his active life period in Riga when he began work at his first important opera "Rienzi", taking away the solutions dictated by the limitations of what is now known as Wagner Hall (the seating arrangement with an incline to improve visibility, an unlit auditorium and lit stage as well as the deeper orchestra pit) as innovations for the Bayreuth theatre.
За период с 2013-06-03 по 2022-12-07 монета подорожала на 10%