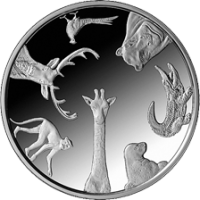 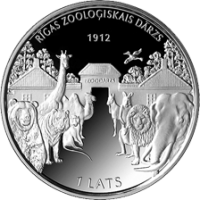 The obverse features the central entrance gates with the inscription ZOODĀRZS (ZOO) and groups of exotic animals on both sides. The semi-circled inscription RĪGAS ZOOLOĢISKAIS DĀRZS (RIGA ZOO) and the year 1912 beneath it are at the top. The inscription 1 LATS is semi-circled at the bottom.

The reverse features a circle of seven animal figures.

The inscriptions LATVIJAS BANKA (Bank of Latvia), LATVIJAS REPUBLIKA (Republic of Latvia) and 2012, separated by dots.

As we enter the Riga National Zoo through the gate built in 1912, we find ourselves in a completely different world concealed under the mighty pines of Mežaparks (the former Kaiserwald) by the cool waters of Lake Ķīšezers. Animals from Europe and Asia, Africa and Australia as well as those from the Americas live side by side here. It is a world where one can marvel at the colours and forms of tropical creatures, visit the spectacular underwater world, get acquainted with the local amphibians, cuddle the denizens of the Farmstead, and try to spot the well-concealed reptiles. It is possible to look the world's tallest animal, the giraffe, in the eye, to observe the diligent leaf-cutter ants, to exchange greetings with the local eagle-owls, to meditate with the dreamy hippopotamus and to admire the tricks performed by the seal.

In addition to buildings constructed a long time ago, the Zoo boasts new state-of-the art ones – Giraffe House, Tropical House, Farmstead, Tiger Enclosure etc. The Zoo's collection currently comprises 3 200 animals of 420 species, and about one third of the species are capable of producing offspring, which highlights the professional skills and love of animals of the people taking care of them. Over 90 of the species represented here are included in the world's list of endangered species while 30 have international pedigree records. The Zoo is a participant in 32 reproduction programmes of the endangered species of Europe. One of its successes is the reintroduction project of the European tree frog: the species that was practically extinct can be found in its former habitats around Liepāja. Internationally, this has been recognised as one of the 30 best amphibian reintroduction projects in the world.

The origins of the Riga Zoo go back to 29 September 1908 when the association "Riga Zoological Garden" was formed with the aim of collecting donations and doing background work for founding a zoo. As of 14 October 1912 (old style), visitors could observe animals of 88 species. During World War I, in 1917, the Zoo was closed, however, and 37 of the most valuable animals were taken to Germany. It was only on 24 September 1933 that the Riga Zoo could reopen with 124 animals of 48 species. World War II generally bypassed the Zoo and the animals thrived through fanatical efforts by its employees. During the Soviet occupation, the Riga Zoo became one of the best in the Soviet Union.

After the restoration of independence the Zoo continued to develop and already in November 1992 it was accepted as member of the European Association of Zoos and Aquaria and on 22 December given the status of National Zoo by the parliament. In 1993, a branch of the Zoo was established near Aizpute, which was named "Cīruļi" in 2006 and since has become a favourite place to visit for all animal lovers. In 2004, the Riga Zoo gained recognition as a family-friendly recreation spot.

The Riga Zoo celebrates the 100th anniversary since its founding with lots of visitors, a well established infrastructure and ambitious plans for the future. This collector coin is a special gift from the Bank of Latvia to mark the occasion.