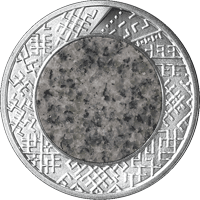 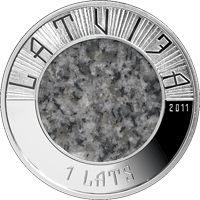 The central part features a gray granite disc encircled by a pattern of Latvian national ornaments on silver outer ring.

The name of the coin takes us back to pre-history, to the Stone Age when, as a result of vast-scale processes in Europe, the rocks (including granite) thrown up from the depths of the earth by the hot magma formed the mantle of the earth. In Latvia, these rocks lie deep and protect us from strong earthquakes. We can therefore say that we have a steady ground underfoot.

The glaciers from Scandinavia gradually slid down southward, bringing the big stones that were not ground up also to Latvia. We take care to protect them because these large rocks are of triple value: aesthetic, because they adorn the typical Latvian landscape, scientific and as cultural heritage. These great rocks served our ancestors in their religious rituals and thus have a deep cultural layer surrounding them, while the rock surface preserves carved or graphic signs transmitting important information of bygone times.

Rocks have often been said to possess a special kind of energy, yet it is important to remember that the Earth is a cosmic body that constantly interacts with other such bodies. The properties of these interactions have yet to be thoroughly researched, but it seems an objective fact that the more substantial a rock, the more compact it is in its composition and the more energy it possesses.

Also in Latvian rural everyday life, stone has always had its place of honour. It has been laid as cornerstone when building a house, the grindstone has been put in much use, cobblestones line the romantic streets of old towns, and to this day stones are used to decorate lawns. The Balts have always assigned great symbolic value to stone: it signifies eternity and timelessness. The close ties the word granite has with farmer's greatest treasure (in Latin, granum means 'grain') evoke associations with harvest in the widest sense. Used here, granite expands the borders of coin art.

The great colour range of granite is formed by feldspars, quartz and coloured minerals. The speckled granite disc in the reverse of the coin is framed by a silver band with carved ornaments. The circle-shaped pattern of the ornaments suggests strict dynamism and a particular order: the simple gradually evolves into the complicated. The idea for this ornamental motif has been borrowed from the legendary Lielvārde belt, which has been included in the Latvian Cultural Canon. In Latvian tradition, a belt possesses magical properties: it is said to protect the wearer and ensure regeneration of plant, animal and human life. Plaiting a belt on Midsummer's night most probably symbolised putting one's earthly life in order.

In the silvery band that encircles the coin's obverse, the word LATVIJA has been carved in the style of Latvian ornaments. The granite core of the coin and the rays of the rising sun are the symbols of vitality and profoundness.
За период с 2012-12-29 по 2022-01-19 монета подорожала на 21%