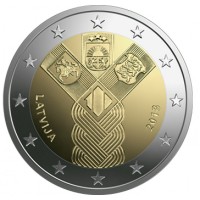 To celebrate the 100th anniversary of the Latvian and Estonian states and the 100th anniversary of the re-establishment of the Lithuanian statehood, the central banks of the three Baltic States − Latvijas Banka, Lietuvos bankas and Eesti Pank – are issuing a 2 euro commemorative coin with a common design on the national side. The design was selected in a public on-line vote to commemorate the Baltic nations' determination to defend their independence. The coin confirms the unity of Latvia, Lithuania and Estonia and their readiness to cooperate defending their independence and freedom and symbolises the common past, present and future of the Baltic States.
The work by Lithuanian designer Justas Petrulis, i.e. a symbolic plait in which the fates of the three Baltic sisters intertwine, received the most votes and has turned into a coin.
За период с 2018-02-01 по 2021-02-19 монета подорожала на 20%