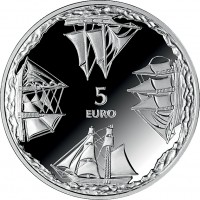 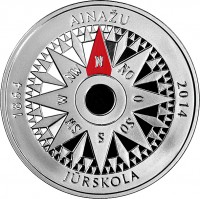 The number 5, with the inscription EURO beneath it, is placed in the centre. Four sailing ships are symmetrically arranged along the outer ring of the obverse.

The central field features a compass, with an element painted red and pointing to the North. There are semi-circled inscriptions AINAŽU at the top and JŪRSKOLA at the bottom, and the years 1864 and 2014 on the left and right respectively.

In the beginning there were words. The call of Krišjānis Valdemārs (1825–1891), an ideologist of the so-called New Latvians, who was one of the key figures in the national awakening movement, found poetic expression in the verses of Auseklis (Miķelis Krogzemis; 1850–1879): "Go to sea, Latvians .." That was a call for Latvians to overcome their backwardness and isolation and take up a respectable place in the world's economy, to get to know the cultural treasures of the human race and integrate with Western civilisation. That could be accomplished by active economic operation and cooperation. The fact that the Latvian lands lay by a bustling sea seemed to be a clear sign of the budding nation's potential.

The words soon turned into deeds. On Valdemārs' initiative, the first Latvian and Estonian nautical school was established on 23 November 1864. This area of Vidzeme had long boasted tough and enterprising men. The seaside people created their prosperity by building small ships and by shipping cargoes to Riga and St. Petersburg. Soon they developed capabilities for building larger vessels and exploring faraway seas, but for that well-educated sailors and captains were needed. Before the establishment of the nautical school, such education was out of the average Latvian's reach. The school was financed by the ship owners of Ainaži: Juris, Andrejs and Oto Veide, Jānis Miķelsons, Gusts Lielmežs and others. It was housed in one of the buildings belonging to Juris Veide's household. The first headmaster was Swede Christian Dahl (1839–1904), who devoted thirty years of his life to this mission. At first, the school functioned as an elementary education establishment, offering specialisation in the fundamentals of navigation and students taking their exams in Riga or Pärnu.

As time went by, Ainaži Nautical School began to be viewed as a model. In 1867, the Russian Empire decreed to create a wider school system of this kind. Forty new nautical schools were opened, of which eleven were located in Latvia. Education was offered free of charge and was available to anyone in their native language. In 1880, Ainaži Nautical School was awarded the highest-category status, which meant that it could now groom sea captains. The school organised training voyages with the sailing ship "Katarina". Ch. Dahl with his students even helped explore the Northern passage. The school also gained several new buildings accommodating about 3 000 students. A thousand of them received the diploma of captain or steersman.

This education was closely tied to shipbuilding in Latvia: by the end of the 19th century, a fleet of 550 sailing ships had formed, of which 50 had been built in Ainaži. Crews of about a dozen people took cargoes not only to all the ports in Europe but sailed also across the Atlantic. Latvians were proudly going to sea, indeed ..

With the advent of World War I came a new era, and steel steamers began to dominate. Yet the previous fifty years of economic activity had had a nurturing effect on national self-confidence. Valdemārs and his fellow visionaries had laid the cornerstone for Latvia's future.

150 years have passed since the foundation of Ainaži Nautical School. By now citizens of free Latvia have sailed the seven seas; they have explored the world, integrated with the European Union and joined the euro area. The first euro collector coin issued by Latvijas Banka is dedicated to the anniversary of Ainaži Nautical School. The ship of great yearning, aspirations and dreams depicted on the coin is certain to sail smoothly around the world.
За период с 2014-03-04 по 2022-12-06 монета подорожала на 55%