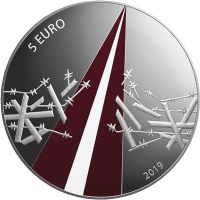 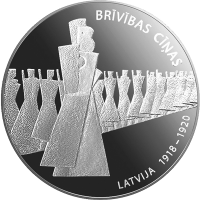 OBVERSE
A stylised march of fighters depicted in the Cubist manner is featured in the centre of the obverse, and a soldier bidding farewell to his fiancée – to the left of the centre. The inscription FREEDOM FIGHTS is arranged in a semicircle along the edge in the right upper part, but the inscriptions LATVIJA and the years 1918–1920 are located at the bottom part of the obverse.
REVERSE
The red-white-red flag of Latvia is featured in the centre with broken entrenchment barriers on each of its sides. The inscription 5 EURO is arranged in a semicircle along the edge in the left upper part of the reverse, but that of the year 2019 – in a semicircle along the edge in the right lower part.
The Republic of Latvia was born on the ruins of empires that had collapsed as a result of World War I. It took more than one and a half years for the people of Latvia to defend the newly acquired freedom and defeat external and internal enemies with weapons in hands. The military and political fight demonstrated the political maturity of the Latvian nation, its selflessness and the right to live in independent, democratic and free Latvia.
One of the most significant and challenging stages in the history of Latvia was the period between the proclamation of the Republic of Latvia on 18 November 1918 and the signing of the Peace Treaty with the Soviet Russia on 11 August 1920. This period is known today as the Latvian War of Independence. The name is relatively new, and it reflects the nature of the particular historical process in a concise manner, i.e. the Latvian people's fight for the existence and independence of its national state. However, consensus regarding an appropriate name for the military and political developments of 1918–1920 has not yet been reached. Various names, i.e. the "Liberation War" as well as the emotional "Freedom Fights" and "Freedom War", were also used by Latvian society between the two world wars. They are still in use, and they have taken root in the people's historical consciousness. Regardless of the different names, they all symbolise one concept – the Latvian nation's fight for its freedom, independence and statehood in 1918–1920.
It was during the Latvian War of Independence that institutions of the new state were gradually established and the Latvian Army was born. Soldiers of Latvia had to fight in fierce battles to bring freedom for the nation. The situation could have even seemed hopeless in late 1918 since the army of a foreign occupying power was still present in Latvia, and the Red Army was rapidly approaching from the East. At the same time, the state had to set up public authorities, find allies and build defence forces. In January 1919, only a few hundred soldiers, who believed in Latvia's existence, left Riga when faced with superiority of enemies. However, half a year later, following the liberation of Kurzeme, Zemgale and Vidzeme as well as the victory won in the Cēsis battles, a single Latvian Army was established in Riga with tens of thousands of soldiers already being part of it.
The Bermondtiade was one of the most serious ordeals the new state had ever witnessed. The Latvian Army and its soldiers demonstrated significant fighting ability and great selflessness, gaining a military victory over the enemy after almost two months of intense battles. 11 November 1919 marked an important milestone in these battles, and it was on this date that Riga was liberated from the troops under the command of Pavel Bermondt. This date is also considered the symbolic day of the founding of the Military Order of Lāčplēsis – the highest military decoration of Latvia. 2019 marks the 100th anniversary of the formation of the Latvian Army and liberation of Riga from Bermondt's troops.
It was only after the defeat of Bermondt's forces and liberation of Latgale in early 1920 that Latvia could fully focus on strengthening its independence. This was done successfully since the people of Latvia believed in the existence of their own state. The collector coin "Freedom Fights (1918–1920)" is dedicated to the Latvian War of Independence and all those people who helped to win independence and hold freedom in high esteem.