Modernism in Latvia. The 1960s 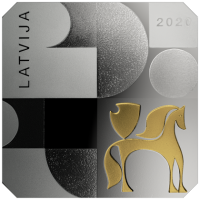 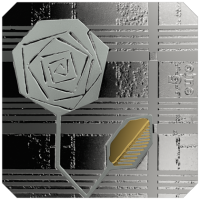 OBVERSE
Fragments of the graphic design of a set of stationery paper (1968; the horse motif) created by Uldis Razums and a graphic motif from the cover of the record "Džeza festivāls 68" (Jazz Festival 68; 1968) created by Gunārs Kirke have been featured with frosting of three different levels of intensity and gold plated details of the motifs. The inscription LATVIJA is placed vertically on top left of the obverse, while the year 2020 is inscribed on top right.
REVERSE
A fragment of the decor of the coffee set "Saulīte" (the Sun; 1964–1970) designed by Zina Ulste and a fragment of the blueprint of the residential building in Brīvības iela 313, Riga, developed by Marta Zigrīda Staņa, Imants Jākobsons and Harolds Kanders have been featured with frosting of two different levels of intensity and gold plated details of the motifs. The inscription 5 euro is placed vertically in two rows along the right edge of the reverse from the centre upwards.
The sixties. It is like a password letting us start a conversation about a critically important decade in the Western cultures of the 20th century, i.e. the time setting the tone for what we call a modern lifestyle. Each of us has some association, be it The Beatles music or the man in space, freedom of hippies or miniskirts, but above all – the promising feeling that the future will bring increasing intensity of life and well-being.
During the Cold War, the borders of the Western and Eastern blocs were strictly maintained. They were guarded by the mythology of the nuclear war threat, equally cultivated on both sides of the Iron Curtain. At that time, Latvia was on the Eastern side of the wall. Here the change in ideals shaped by the new generation could be sensed only indirectly, when some signals having broken through the ideological wall were noted. "And then came the sixties" – this phrase usually refers to destalinisation and regime liberalisation processes in the USSR. Fighting for power, in June 1957 Nikita Khrushchev (1894–1971) retained his position of First Secretary of the Communist Party of the USSR, and the so called Khrushchev's Thaw set in.
Overall, nothing changed; however, in order to demonstrate the advantages of the Soviet regime over capitalism, the USSR focussed not only on the military and heavy industry, but also started developing the light and food industries intensively. Hence, lifestyle changes could also be seen in the daily lives of people. A slight raising of the Iron Curtain was one of the modifications to the previous ideological course. The period of the Thaw brought about hope for a higher degree of freedom and also well-being, while culture saw almost a revolution – the official dogmatic naturalism of Stalin's time was rejected.
Art forms created by the free-thinking artists (called "formalism" at that time) flourished and frightened the political elite. Therefore, close ideological control was retained over fine arts, while the decorative and applied arts and design could breathe and develop more freely. It was the design and architecture where the Soviet modernism found its most consistent expression in those socio-political conditions. This applied also to the cultural space of Soviet Latvia.
Probably it is not so easy to acknowledge the fact that samples of works of art, design and architecture, created in quite recent past, should already be included in the framework of Latvia's cultural heritage and registers of cultural values, recognising the capability of a creative spirit to develop intellectually free space even behind the "closed door" of totalitarianism. Iconic artefacts of the porcelain art, graphic design, architecture and interiors also relate to this decade. The heritage of this period is characterised by its transient nature. Household articles, packaging design, interiors and even reinforced concrete buildings might disappear for good; but the next generations will have learned from the Soviet modernism.
The coin features elements from the works of architect Marta Zigrīda Staņa (1913–1972), porcelain artist Zina Ulste (1928–2005), graphic designers Gunārs Kirke (1926–1993) and Uldis Razums (1944–2019). The different graphic means of expression testify to the unifying phenomenon of modernism stylistics; equally, this was also a way you could speak about the potential freedom in those days.
За период с 2020-10-10 по 2022-12-06 монета подорожала на 7%