The Garden of Destiny 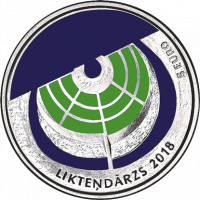 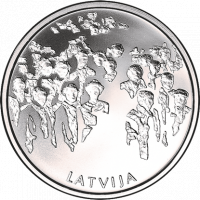 Inscriptions LATVIJAS BANKA and LATVIJAS REPUBLIKA, separated by rhombic dots.
The idea of the Garden of Destiny came as a response to a heartfelt desire of the people to create a national memorial site in honour of those 600 thousand people of Latvia who suffered and perished during totalitarian regimes of the 20th century. On 7 June 2005, a group of initiators assembled to establish a foundation. The Koknese Foundation decided to create a memorial site symbolizing our nation's grief for the victims, commemorating their lives and resilience, but also inspiring us for the future. Vilis and Marta Vītols donated 640 thousand euro, thus forming the initial capital of the Foundation. Since its launching, 2.5 million euro have been invested in the project.
The Garden of Destiny is risings on an island in the Daugava River near Koknese. This picturesque area is a crossroads of cultural and historical diversity of Zemgale, Sēlija and Vidzeme where threads and vibes of Latvia's history and mythology intersect. The island is marked by a section of the ancient Riga–Moscow road and scarred by the dugouts of World War I. The remains of the medieval Koknese Castle, once built by the German knights, loom over the river. The medieval trade route "from the Varangians to the Greeks" went along the island. Nearby rests Staburags, a sacred site for our nation, once a rock flooded in 1966. The Daugava banks at Lielvārde, from where "at last his foe Lāčplēsis (Bear-slayer) flung into the river's depth to drown", have lost part of their majesty. Despite all trials and sufferings, the nation has remained staunch in the belief that "then for the folks new times will dawn; at last their freedom will be born".
The author of the memorial park concept and the winner of the international competition is Shunmyo Masuno, a Japanese landscape architect. The landscape conjured by him gradually transforms the visitors' grief and sorrow into reflective healing of the soul, making people ready to meet the eternity, embodied by timeless light, wind, water and earth. Masuno's concept is brought to life thanks to the efforts of Koknese Foundation. The Observation Terrace and Amphitheatre have been completed and are surrounded by 40 oak-trees and a canal. The site can be reached by a cobblestone avenue where everyone can leave their names inscribed. On both sides of the avenue apple trees and 2600 other trees donated by "Latvijas valsts meži" and the Latvian Plant Growers Association are growing. A digital exposition "Liktens gāte" and a virtual memorial house with a would-be interactive database tell the story of nation's times and values.
Over the years, tens of thousands have engaged in creating the Garden of Destiny by donating or lending a hand. The number of project supporters exceeds 500 thousand, and visitors from at least 54 countries have come to the site. The Garden of Destiny is nurtured as the nation's present to Latvia on its centenary. The Freedom Monument is our legacy from the generations of the previous century; the Garden of Destiny will be our legacy to the future generations. It is memory, inspiration and strength. For the Future!