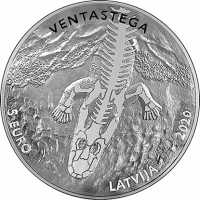 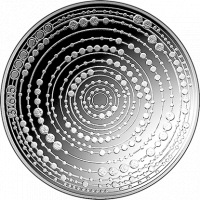 OBVERSE
A tetrapod Ventastega curonica, coming out of shallow waters on land, is featured in the centre; its skeleton is marked with photo luminescent print. A semi-circled inscription VENTASTEGA is placed along the upper edge of the obverse; inscriptions LATVIJA and 2020 are arranged to the right and the inscription 5 EURO to the left in a semi-circle along the bottom part of the edge.
REVERSE
The course of time over millions of years has been featured in a stylised manner as dots and lines on the reverse. Inscription 365 000 000, indicating the number of years, has been arranged along the left edge.
Rock layers under our feet bear evidence of the history of the territory of Latvia and those having lived here. The fossil remains of Ventastega curonica, a Devonian period animal found at rock exposures in the Venta River basin near Skrunda in Kurzeme, is an important discovery in geology and palaeontology. The name of the species bears reference to the Venta and Kurzeme, and by this name this animal is recognised among scientists and prehistory enthusiasts all over the world. Ventastega was a four-legged predator, with its length slightly over one metre; it lived approximately 365 million years ago. At that time, the territory of the present-day Latvia was located some degrees to the South from the equator, at the south-eastern edge of the palaeocontinent of Euramerica.
Rocks and the fossils of animals and plants preserved in them are the only evidence from those ancient times. Just a few findings of Devonian tetrapod fossils are known today. These are the findings of complete skeletons of Ichthyostega and Acanthostega in Greenland; fossils of other tetrapods are usually very fragmentary, providing little information about the evolution of this group. Therefore, the findings of Latvian ventastega and the related lobe-finned fish are of considerable scientific importance when studying the evolution of vertebrates. Although there are no fossils of complete skeletons of ventastega, the fossils of Devonian vertebrates found in Latvia, including those of ventastega, are particularly valuable as they are well-preserved: the sandstone allows for quite easy preparation, hence the fossils retain their three-dimensional form that is close to the original. Other palaentological findings in the Devonian rock layers in Latvia are also highly valuable for scientific research and globally rare, e.g. complete skeletons of lobe-finned fish and placoderms and even fossils of Devonian fish fingerlings in the clay sediments of the Middle Devonian period.
The Devonian period (419–359 million years ago) is quite often referred to as the Age of Fishes. At that time, there were no dinosaurs, birds or mammals on the Earth; various groups of fish and jawless fish, i.e. relatives of today's lampreys, were quite widespread, enjoying rich diversity and being the only vertebrates. Towards the end of the Devonian period, the pectoral and pelvic fins of the lobe-finned fish group gradually evolved into legs: the first tetrapods or four-legged animals began to develop, i.e. the group where the amphibians, reptiles, birds and mammals (including us, humans) belong now, having developed on the Earth in the course of evolution.
The lobe-finned fish, ancestors of tetrapods, had fins with well-developed internal skeleton and muscles. The bones characteristic of human hands and legs can be recognised in their fin skeleton. The development of fins into legs was a gradual process, initially unrelated to adaptation for walking on land. A shallow sea covered most of the territory of the present-day Latvia in the Devonian period. The research of fossils and the rocks containing them suggests that the legs had developed in order to adapt to life in river deltas and littoral areas overgrown with seaweeds: legs probably served as a certain advantage when catching slower fish in the shallow waters of the tidal area. Nevertheless, the Devonian tetrapods generally lived in water, and the legs, developed when adapting to life in the shallow parts of water bodies, only later turned out to be a new benefit for spreading further inland.
The silver collector coin of Latvijas Banka is dedicated to an original and outstanding evidence of Latvian history providing an opportunity to learn about and understand the course of evolution, thus making Latvia particularly important globally.
The coin features the image of ventastega. Its skeleton is marked with photo luminescent print (with a glow in the dark effect). Keep the coin in direct bright light for at least 40 seconds; then look at it in the dark – ventastega's skeleton will glow.