150 years of firefighting in Latvia 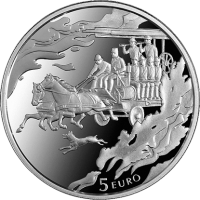 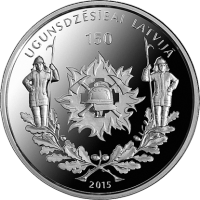 The obverse features firefighters' symbols on the background of flames, with the images of firemen on the right and left. Crossed oak branches form a motif at the bottom. The semi-circled inscription UGUNSDZĒSĪBAI LATVIJĀ (Firefighting in Latvia) is placed at the top, with the figure150 beneath it. The year 2015 is inscribed in the lower part of the obverse.

The image of fully-equipped firefighters' team in a horse-drawn cart is the central motif. The lower part features the semi-circled inscription 5 EURO.

As soon as Prometheus had stolen fire from the gods on Mount Olympus and given it to the mortals, people learnt how to control fire and started to use it in their everyday life. Alas, fire simultaneously multiplied the problems of humankind. The human history abounds in disasters, smaller and bigger, brought or caused by fire. Over time, fires, calamities and lesser everyday accidents have been gaining in diversity and complexity. The control of fire soon highlighted the need for more specific firefighting methods, advanced organisational principles and procedures as well as better equipment and technologies. Firefighting entered a new phase, and volunteer firefighting brigades gradually changed into professional or career divisions.

In Latvia, the very first firefighters' brigade was formed in 1845 in Daugavpils, then Dinaburg of Vitebsk gubernia. The first firefighting unit in Riga emerged in 1864; the first fire it extinguished on 17 May 1865 burnt someplace in the old town. Riga was immediately followed by Mītava (currently Jelgava), with volunteer fire brigades popping up one after another and putting out bursting flames elsewhere in Latvia. Prior to World War II, there were well over 200 firefighting brigades all in all.

A unit of firefighters, called "The Running Column" and paid by the City Council, was established in Riga in 1882. It was joined by four firefighters divisions in 1907, forming a city team headed by a brand major of the Riga City Firefighting Department. Four fire stations were built there between 1886 and 1902; another one built in 1910 at the corner of Hanza and Strēlnieku Streets (currently the Latvian Firefighting Museum) was crowned by an observation and fire hose drying tower. Thanks to the mastery of architect Reinhold Georg Schmaeling (1840–1917), these buildings today preserve their historical significance and cultural value.

The evolving of Latvia's firefighting transport and equipment from hand to steam pumps and from horse-drawn carts to powerful motor vehicles has been exciting. Riga purchased a steam pump known as Fire King produced by Merryweather & sons in 1910 and it was in operation until 1925. A firefighters' automobile D24/40 produced by the Russian-Baltic Carriage Factory in Riga in 1912 is now displayed at the Riga Motor Museum. Automobiles produced by Ford-Vairogs in Riga became popular at the end of the 1930s.

At present, Latvia has a service for firefighting and rescue meeting international standards, with its routine functions expanding also in the area of fire safety and civil protection. The State Fire and Rescue Service of Latvia is an active participant in the programmes of the NATO Euro-Atlantic Disaster Response Coordination Centre, the Humanitarian Aid and Civil Protection Department of the European Commission and theUN Officefor the Coordination of Humanitarian Affairs.

The euro collector coin dedicated to 150 years of firefighting in Latvia honours the firefighters and rescuers for their professionalism and heroic acts of bravery for the good of the nation.