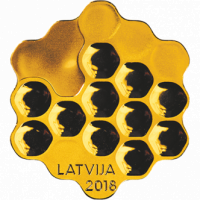 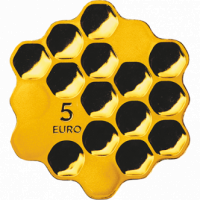 Honeycomb cells form a rough outline of the geographic contour of Latvia and the Gulf of Riga. Various types of frosting are applied to achieve this effect. The inscription LATVIJA is placed in the lower left part of the coin, with the year 2018 below it.
Reverse

Reverse features honeycomb cells. The number "5" is placed to the left of the centre, slightly lower, with the inscription EURO featuring below it.
Edge

Plain.
Bees have been working hard on the Earth for millions of years. The rather selfish friendship of humans with bees emerged as a result of continuous fight for livelihood. Initially they used the generous gifts arising from efforts of bees in a cautious manner in natural surroundings. It was the honey harvested from the nests of forest bees that our ancestors tasted first. The oldest man-made beehives of the 10th century BC have been found in the Middle East in the territory of the present-day Israel. The scientific foundations of beekeeping were laid in German states only at the end of the 18th century. In the 19th century, beekeeping specialists in various countries across the globe contributed to the creation and improvement of the modern hives with removable frames (or honeycombs) and with bee-entrances.
The job of beekeepers involves work with aromatic beeswax cells and golden honey we tend to compare to amber. Since time immemorial, Latvians have associated the work of beekeepers with a healthy lifestyle, and it has also been surrounded by the poetic atmosphere of folk songs. A place bustling with bees tells us that it is dominated by cleanliness, harmony and order. It is the place where people's thoughts become lighter and their bodies healthier.
Honey was used to cure wounds and illnesses in ancient Egypt. Egyptian pharaohs also made use of honey during religious rituals. In ancient Greece, mathematician Pythagoras (~580–500 BC) and philosopher Democritus (~460–370 BC) believed that eating honey was a precondition for a long life. Meanwhile, Aristotle (384–322 BC), the founding father of natural sciences, recommended honey as a means for curing eye diseases, while Hippocrates, the founder of medicine, invited people to use honey both on its own and together with water or wine. He believed that honey was nourishing, that it made one's face look better and that it had medicinal properties. The ancient Greeks appreciated honey to the extent that they featured a honey bee on their coins. Meanwhile, honey served as a valid form of currency for the Romans since many people paid their taxes in honey.
Approximately 6 000 years BC, when the climate got warmer, the territory of the present-day Latvia saw the first bees. Archaeological excavations suggest that it was already in the period from the 2nd to the 4th centuries that people consumed honey. Between the 10th and 14th centuries, honey and beeswax along with amber and cereals played an important role as exchange and market goods. At the beginning of the 19th century, many landlords set up permanent apiaries in their forests. At the end of the 19th century, every fifth farm had an apiary; however, it usually consisted of just some bee colonies since honey was used entirely for self-consumption.
Today honey in Latvia is consumed on its own, it is used in confectionery, beverages, traditional medicine, bath-house rituals, massages and cosmetics. Honey contains antioxidants and vitamins, mineral substances and trace elements, and it has antibacterial effects.
None of the bees living in a colony consisting of 30–80 thousand bees ever sleeps, each bee collects food for the colony and construction materials for the hive and breeds new generations of bees. The collected nectar and pollen are turned into honey and bee bread. Bees, which are up to one and a half centimetres long winged insects weighing about one tenth of a gram, produce a fantastic quantity of honey for people every year.
Lazybones, go to a bee
To learn its virtue.
It has neither masters nor elders
In its sweet daily job.
The image of our Dievzemīte (the Land of God) has been nurtured and cherished for years. Citizens, who are as busy as bees in their day-to-day lives, enrich their country like bees fill a hive. Therefore, the "Honey Coin" is a symbol of diligence and sweetness of work.