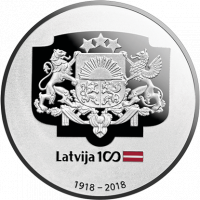 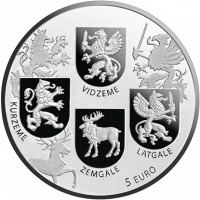 Obverse
The coat of arms of Latvia is featured in the centre, with the logo of Latvia's centenary placed below it. The years 1918–2018, inscribed in a semicircle, are at the bottom of the obverse.
Reverse
The coats of arms of Latvia's cultural and historical regions and the inscriptions KURZEME, VIDZEME, ZEMGALE and LATGALE are placed against the background of the lion, griffin and elk, the heraldic symbols of the historical coats of arms. The inscription 5 EURO, arranged in a semicircle, is at the bottom on the right.
Edge
The inscription "DIEVS, SVĒTĪ LATVIJU!" (God Bless Latvia!); a rhombic dot separates the end of the sentence from its beginning.
Both sides of the Daugava River
Will remain undivided for ever:
Kurzeme alongside with Vidzeme and Latgale –
They all belong to us.
These lines by the Latvian poet Rainis materialised on 18 November 1918 when an independent state, uniting all territories inhabited by Latvians, was established for the first time ever. The complicated course of Latvia's history was also reflected in its heraldic symbols.
The coat of arms of Latvia was approved by the Constitutional Assembly on 15 June 1921. The author of its sketch was Vilhelms Krūmiņš (1891–1959), but the official version was developed by Rihards Zariņš (1869–1939). The basic elements used in the creation of the state coat of arms were the sun (symbolising the people's freedom) as well as the lion and griffin, the classical heraldic symbols. The lion was part of the coat of arms of the Duchy of Courland and Semigallia (1562–1795) and reflected western Latvia. The griffin was associated with Vidzeme and Latgale throughout the history of Latvia's heraldry dating back to the days of the Duchy of Pārdaugava. The three stars above the shield embodied the idea of incorporating the historical regions into unified Latvia. The coat of arms was supplemented with a stylised wreath of oak leaves, the symbol of strength and independence of the Latvian nation, and a red-silver-red ribbon having the proportions of the Latvian national flag. The coat of arms along with the flag and anthem symbolised national independence. Therefore, people who used it during the years of Latvia's occupation ran the risk of punishment. It was in 1990 that the coat of arms regained its legitimacy as a token of independence, but in 1991 it was once again renewed as a symbol of the independent Republic of Latvia.
The logo of Latvia's centenary is featured on the obverse of the coin under the coat of arms.
The division of Latvia into cultural and historical regions is stipulated by Article 3 of Satversme (the Constitution of the Republic of Latvia). Their coats of arms created by artist Kārlis Krauze (1904–1942) were established by the Regulations on Coats of Arms of Latvia's Regions adopted on 26 April 1930. Pursuant to the Law on Coats of Arms of Vidzeme, Latgale, Kurzeme and Zemgale, these coats of arms regained their legal protection as national symbols in 2012.
The coats of arms of Kurzeme and Zemgale originate in the heraldic symbols of the Duchy of Courland and Semigallia. The silver elk on a blue background, featured on the coat of arms of Zemgale, and the red lion on a silver background, turned in the opposite direction, depicted on the coat of arms of Kurzeme, have been inherited from the Duchy's coat of arms. The elk is a rare figure in heraldry and symbolises the richness of nature here. Meanwhile, a rampant lion is one of the most common heraldic symbols representing strength and power.
Vidzeme and Latgale obtained their heraldic symbols at the time when the Duchy of Pārdaugava, subject to the Polish–Lithuanian Commonwealth, was formed on the right bank of the Daugava in the eastern part of the present-day Latvia. The griffin depicted on the coat of arms, granted to the new administrative formation in 1566, combined the features of kings of animals and birds, symbolising comprehensive might and strength. The silver griffin holding a sword in its right claw, incorporated in the coat of arms of the Duchy of Pārdaugava, is featured on the coat of arms of Vidzeme (on a red background) and on that of Latgale (on a blue background turned in the opposite direction).
The euro collector coin bearing the images of the great coat of arms of the Republic of Latvia and the coats of arms of its cultural and historical regions is Latvijas Banka's contribution to Latvia's centenary.
За период с 2018-10-23 по 2023-02-07 монета подорожала на 10%