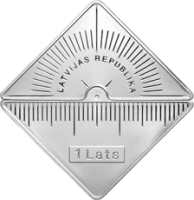 The upper triangle bears the inscription RĪGAS TEHNISKĀ UNIVERSITĀTE (Riga Technical University) on the background of Riga panoramic view in relief. The lower triangle features gilded images of a pair of compasses and a triangle ruler, the elements of the logo (coat of arms) of the Riga Technical University, on the background of the reflection of Riga panoramic view in straight, relief lines which become visible at a particular angle of viewing. Depending on the angle of viewing, the years 1862 and 2012 become visible on the lower vertex.

On 14 October 2012, the Riga Technical University, established under the name of Riga Polytechnical Higher School as the very first institution of higher learning in the present-day territory of Latvia and the first technical university in the Baltic States, marks its 150th birthday. This institution of higher education was modelled after the most progressive European technical universities in Zurich, Hannover and Karlsruhe. It offered instruction in German, accepting only men from the entire Russian Empire; as a private educational establishment it was financed by the Baltic nobility.

In 1896, this higher school was transformed into an official higher educational establishment of the Russian Empire, with its name changed to the Riga Polytechnical Institute (RPI). Following the example of European universities, the Institute retained its autonomy, while the official language of instruction was Russian. With the outset of World War I, the Institute was evacuated to Moscow to operate there until 1918.

The RPI was renewed in 1958, with the student body of almost 3 000. In the 1970s, the Institute evolved into the largest Baltic establishment of higher education. It got its present name of RTU on 19 March 1990.

In the course of 150 years of the RTU existence, many outstanding researchers were educated and worked there. The most renowned of the RTU academic staff are Vilhelms Ostvalds (the only Nobel Prize winning chemist of Baltic origin) and Pauls Valdens (chemist and rector of RPI, seven-time Nobel Prize nominee).

In 2011, the RTU employed a total of 412 researchers, and academic staff numbered 531. The RTU researchers develop over 300 projects, participate in more than 1 000 international conferences, and publish close to 1 000 scientific articles on an annual basis.

The evolution of RTU study processes to provide education, both academic and higher professional that meets the EU standards, and to produce specialists for all major branches of the Latvian economy does not cease. It is deeply rooted in the concept of third generation universities, as in the context of dynamically changing environment the fundamentally new role and public mission of higher education should find their reflection in subsequent organisational changes.

Implementing a model of integrating interests and roles of diverse partners, the research, including also fundamental research, has lost none of its importance and is still among RTU's core activities. Operating in an internationally competitive setting, the RTU's quality study programmes form the second pillar, while the application and transfer of created knowledge constitute its third pillar. Innovation and creativity as fundamental driving forces and instruments of growth are of similar importance to rational research methods. Along with the conventional research and educational functions, the promotion of and support to entrepreneurial activities are gaining ever more importance within the RTU. Close cooperation with industry, private research and development (R&D) sector, financial institutions, professional service providers, and other universities in Latvia and across the globe is of vital importance as well.

Acknowledging that money is the most influential auxiliary instrument to satisfy human thirst for knowledge and creativity, the artist Kristaps Ģelzis has designed the collector coin dedicated to the RTU as a small yet practically employable tool, which enables the measurements of size, direction and source of origin. Likewise, modern technologies have been of particular importance for the emergence of this coin and another tool associating it with the RTU.