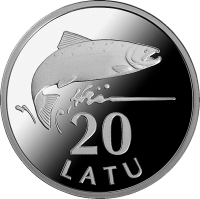 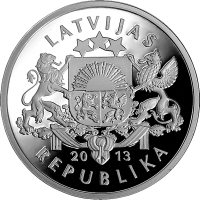 
Obverse
The large coat of arms of the Republic of Latvia, with the year 2013 inscribed below, is placed in the centre. The inscriptions LATVIJAS and REPUBLIKA, each arranged in a semicircle, are above and beneath the central motif, respectively.

Reverse
A salmon, the symbol of Latvia's abundant water resources, is shown jumping out of the water from left to right. The numeral 20, with the inscription LATS in a semicircle beneath it, is centered in the lower part of the coin.

Cherished and treasured, pleasant to hold and to contemplate, our Latvian one-lats coin is the basic unit of the entire family of lats. Many of us call it lasītis, the Latvian endearment for salmon, for it is the Latvian salmon, lasis, whose image has been adorning the reverse of the coin for twenty years. Caught in its leap above the water, this is how one of the best Latvian designers, Gunārs Lūsis, conceived it. The artist is a master-fisherman himself, yet in the gracefulness in the salmon's midair leap he has managed to detect deep symbolism.

Salmon on the one-lats coin is not just a delicious variety of fish found in the Latvian waters. Salmon is the king of the water and a symbol that ascertains Latvian love of nature that is a basic national trait. To be out in the nature, it is a lifestyle and a way of seeing the world. With the vitality of a salmon, the Latvian once leapt from the rural world into the urbanised and urbane civilisation. Salmon points to the value of labour in a direct and indirect sense: following the work ethic, and putting away coin after coin, people have managed to accumulate substantial wealth. The salmon symbol also points to one of the basic occupations of the Latvians, fishing, as well as to the impact on our lives of water – be it river, lake or the sea. Not only the soil and the forest, but also the rich waters have been feeding the Latvian people for centuries.

If we consider the circulation of money as part and parcel of the blood circulation of the economy at large, the one-lats coin can be seen as a tiny blood cell. The weight, power and energy of the lats is a reflection of the power and intellectual capabilities of the nation.

Twenty years is almost as long a time period that Latvia existed before World War II. The first issue of lats at that time helped to bring about economic success. Time has passed amazingly quickly in nowadays as well. To many, twenty years may seem just a brief moment after the freedom barricades that seemed to have happened only yesterday; yet it is a period that contains many historic events and accomplishments; there have been great hopes and successes but also mistakes and failures. At times headstrong and proud, at other times humble and prudent, we have a stable position in the world at large.

The Bank of Latvia is commemorating the birth date of the Latvian lats by issuing a silver replica of the original one-lats coin with a twenty times increased nominal value.