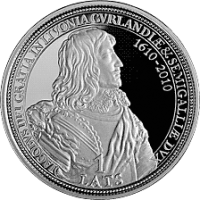 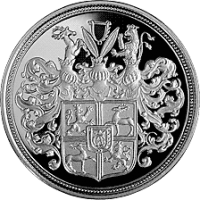 Duke Jacob's portrait in profile is depicted in the centre, with inscription 1 LATS below; the semicircular inscription 1610-2010 is placed on the right-hand side above; the inscription IACOBUS DEI GRATIA IN LIVONIA CVRLANDIAE & SEMIGALLIAE DVX encircles the central motif along the coin's edge.

The coat of arms of the Duchy of Courland and Semigallia is in the centre.

Duke Jacob (1610-1681) is the most prominent member of the Kettler dynasty that ruled in the Duchy of Courland and Semigallia (1561-1795) until 1737. Officially, he was enthroned in 1642 after his Uncle Friedrich's death, though in fact he had governed the Duchy already since 1639.

Jacob was the godson of King James I, the King of England. Most of his upbringing was done at the Hohenzollern Court in Berlin. Jacob studied in Leipzig and Rostock and travelled over Europe. The broad vision he thus developed later allowed the Duke to modernise his realm. Seventy manufactories were established in Courland, representing a variety of industries starting with pig-iron casting and ending with tapestry weaving. Over 135 ships were built; urban craftsmanship flourished; churches and schools were erected. Courland's merchant marine, the largest in the Baltic Sea, shipped the Duchy's produce to many countries worldwide. France and England procured the ships built in the shipyards of Courland. Duke Jacob set up colonies on the Tobago Island in the Caribbean and the delta of the Gambia River in Africa. Apart from bringing international recognition to Courland, they promoted the transit of colonial goods. Though Duke Jacob loved art and culture, he never attempted to impoverish his country by copying the habit of the West European sovereigns of building luxurious palaces.

In 1645, Duke Jacob married Louise Charlotte, Princess of Brandenburg-Prussia, and their happy wedlock was blessed with nine children. However, similar to Latvia, both his family and the Duchy had a destiny determined by geographical location amidst great powers: in 1658, at the time of the Polish-Swedish War, Jacob and his family were taken prisoners by Swedes and held in detention for two years. The subsequent part of the Duke's rule was spent prevailingly in rebuilding the destroyed economy.

Duke Jacob has become a next-to-mythological personage embodying the image of the "good and smart" ruler. Yet, the continuation of his life is not a mere historical legend - the Kettlers' blood must be running through the veins of more than one royal family of present-day Europe.

The obverse of the coin has been designed after a silver memorial medal, presumably struck in 1642, commemorating Duke Jacob's coming to power. Not a single copy of the medal could be found in Latvia after World War II. The Duke's proud profile will remind the owners of the coin of the talented and brilliant personality who took Latvia to Europe as early as several centuries ago.