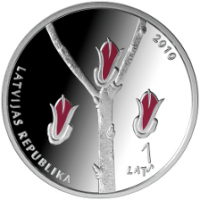 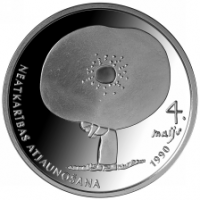 A branch with three opening buds is placed in the centre. The inscriptions LATVIJAS REPUBLIKA (Republic of Latvia), semi-circled on the left side, 1 LATS at the bottom right, and year 2010, semi-circled at the upper right, are featured on the obverse.

An image symbolising Mother Latvia with a millstone - load of freedom - on her shoulders is placed in the centre. The inscriptions NEATKARĪBAS ATJAUNOŠANA (Restoration of Independence), semi-circled on the left side, 4. maijs (4 May) and year 1990, both on the right side, are featured on the reverse.

The morning of 4 May 1990 was sunny and warm. Fragrant bird-cherry trees were in blossom. The spring flowers at the foot of the Freedom Monument were laid to form the red-white-red national flag. It was not yet an official holiday in Latvia but most people felt as if they were a part of a great celebration.

At 10 a.m. the Supreme Soviet of the Latvian SSR began a meeting on the restoration of independence of the 1918 Republic of Latvia that had been occupied since 1940.

The day before the newly elected MPs from the Popular Front of Latvia gave an oath at the Brethren Cemetery not to waver from the course adopted to reach the lofty goal, not to fear the opposing forces, and to vote for Latvia's independence. However, as the extremely strained relationships of Lithuania and Estonia with the Kremlin showed after the adoption of similar decisions in March, a harsh battle for a real political, judicial, and economic independence was still ahead. For that reason a Declaration of the restoration of the independence of the Republic of Latvia was of great importance as proof of Baltic unity that carried the same weight for world democracy as the fall of the Berlin Wall.

To change the fundamental law of the state, more than two thirds of the parliamentarian votes were necessary and a loud wave of joy reverberated through the ancient streets of Old Riga when it turned out that 138 of 195 deputies had voted for Latvia's independence from the USSR.

The people's representatives walked out of the meeting hall, their fingers forming the victory sign. "Victory!" the people shouted back. On this sunny day, cheeks got wet from the bright rain of joy. Three flowers in the national colours to everybody! The state language, the national anthem, the national flag. Three countries united in their struggle for independence. A republic that was born, then killed, then resurrected. The blood shed for freedom on the barricades of January 1991 helped to destroy the chains struck by the secret protocols to the Molotov-Ribbentrop pact.

Shaking off the yoke of oppression, Mother Latvia stood tall. In the joy of victory, thousands of pairs of hands rolled the heavy, sweet, and most valuable load of freedom on her shoulders. Each and every patriot must now help to carry it - an ever-rotating earth, an ever-running millstone or a life-sustaining sun. The miracle of 4 May 1990 should never be dropped or put aside as too heavy.