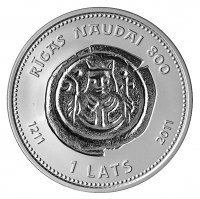 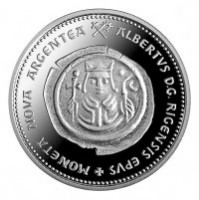 The obverse of the coin features a pfennig of Bishop Albert's time (1198–1229) centred on a plain surface, displaying a front view of bishop wearing a mitre, holding a cross in his right hand and a crosier in his left, both with a small ball above. The central image is surrounded by the inscription RĪGAS NAUDAI 800 (Riga Money 800) at the top, and years 1211 and 2011 as well as the inscription 1 LATS at the bottom. Along the edge of the coin, there is a belt of pearls.

The reverse features the original pfennig on a dulled surface, which is surrounded by the legend comprising a cross and bishop's crosier in a crossed position, the symbol of the Archbishopric of Riga, and the inscription ALBERTVS D(ei). G(ratia). RIGENSIS EPVS(episcopus) MONETA NOVA ARGENTEA (Albert, by the grace of God, Bishop of Riga New silver money). Along the edge of the coin, there is a belt of pearls.

The right to mint own money has always been a symbol of sovereignty, as money is a sign of independence and certain level of economic development. As early as the second half of the 11th century, the small ethnic groups living in the present-day territory of Latvia, particularly the Livs, made imitations of Western European denars, signifying that the community had reached the stage of establishing a national state.

In the 13th century, Latvia was the battlefield of crusades, this same era seeing the formation of political and trade relations with Western Europe as well. The crusaders, propagators of faith, and traders brought along their money as well: bracteates, half-bracteates, and pfennigs minted in Westphalia and cities of Northern Germany. Little silver bars, in the Chronicle of Henry of Livonia referred to as oserings, were also used as a means of payment.

Locus Rigae was the location of villages inhabited by the Livs and Cours where Berthold, the Bishop of Üxkül, was killed in a battle in 1198. On 29 March 1199, Pope Innocent III consecrated Albert (Albrecht von Buxhövden; 1199–1229; born around 1165 in Archbishopric of Bremen) the third bishop of Livonia (Üxkül). In 1200, Albert arrived in Livonia from Bremen, choosing Üxkül (present-day Ikšķile) as his residence. A year later, he moved his residence to Riga, thus becoming the first Bishop of Riga. While Bishop Albert's political, religious, and economic activities remain controversial, as a result of the crusades the Baltic lands did come under the influence of the European system of views and values.

Riga asserted its independence in 1211, when Bishop Albert granted the traders from Gotland the right to mint coins in the Bishopric of Riga with the proviso that they had to be as good and as weighty as the Gotland money and that 4.5 so-called pfennig marks should be equal in weight to one Gotland silver mark, while the design might differ. The sources provide scant evidence, and no exact time is known for promulgating the said privilege. The dates in the collection of Livonian documents Liv-, Esth- und Curländisches Urkundebuch range from April to August 1211. The coins minted in the Bishopric of Riga remained long unidentified.

Just prior to building the Riga hydroelectric power station, substantial archaeological excavations took place in several locations, including Mārtiņsala in the middle of the River Daugava where one of the first brick castles in the territory of Latvia, Holme (Island), was once located. The construction with the help from millstone cutters from Gotland was begun shortly after the first castle in Üxkül (1184) was completed, i.e. in 1186 or 1187. In the Mārtiņsala archaeological dig (castle, church, village, and cemetery), which was led by archaeologists Ēvalds Mugurēvičs and Anna Zariņa, a hearth with twenty identical coins of unknown provenance was uncovered in 1968.

The coins featured the front view of a bishop wearing a mitre, holding a cross with a ball above it in his right hand and a crosier in his left; surrounding the image was a circle. The design of the coins was very similar to Albert's seal and their nominal was one pfennig (or penig in the Niederdeutsch language). From the 8th century to the moment when the groat appeared in the 13th century, the pfennig was in fact the only silver coin in Europe and was minted as a bracteate (from Latin: bractea – thin tin), i.e. a one-sided coin struck of thin silver with one coin-press. Numismatist Rasma Ceplīte is of the opinion that these might be the first coins struck in Riga in accordance with the privilege granted by Bishop Albert. Subsequent research convincingly proved Riga as the provenance of these coins.