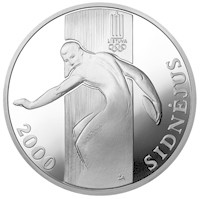 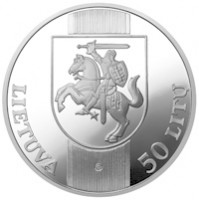 The obverse of the coin features the Coat of Arms of the Republic of Lithuania inside a shield. The inscriptions LIETUVA (Lithuania) and 50 LITŲ (50 litas) are arranged in a semi-circle.

The reverse of the coin displays a discus thrower with the logo of the Lithuanian National Olympic Committee at the top. The inscriptions 2000 and SIDNĖJUS (Sydney) are arranged in a semi-circle.

The words on the edge of the coin: NUGALI STIPRUS DVASIA IR KUNU  (THOSE STRONG IN SPIRIT AND BODY SHALL BE VICTORIOUS).

The coin won first place in the "Most Artistic Coin" nomination at the Coin of the Year (COTY) election held by Krause Publications (USA) in Osaka, Japan in 2002.