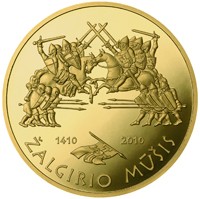 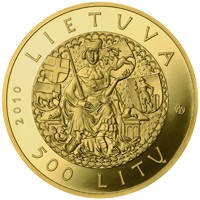 The obverse of the coins features the majestic seal of Grand Duke Vytautas, encircled by the inscriptions LIETUVA, the year of issue, 2010, and the denomination 500 LITŲ (500 litas).

The reverse of the coin features scenes from the Battle of Grunwald, which include details of horsemen and infantrymen clothing, armour and weapons, typical of that time. The inscriptions ŽALGIRIO MŪŠIS (The Battle of Grunwald) and 1410-2010 are arranged in a semicircle.

On the edge of the coin: stylised 15th century spearheads.

The coin won second place in the Vicenza Numismatica nomination at the international numismatic exhibition Vicenza Numismatica in Vincenza, Northern Italy, in 2011. Second place in the "Gold Coin of the Year" nomination at the international commemorative coin contest Coin Constellation, held in St Petersburg, Russia, in 2011. The Coin was also nominated in the Coin of the Year contest organised by numismatic catalogues publisher Krause Publications (USA) in 2012.