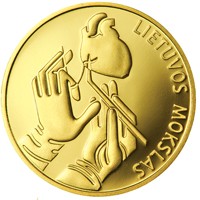 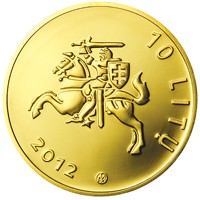 The obverse of the coin carries a stylized image of the Coat of Arms of the Republic of Lithuania (Vytis) in the centre. The inscriptions 10 LITŲ (10 litas) and 2012, as well as the mintmark of the Lithuanian Mint are arranged in a semicircle around it.

The reverse of the coin artistically depicts a surgeon’s hands and a stylised heart, created according to the motives of the medal by Stanislovas Kuzma, “Vilnius University Cardiac and Vascular Laboratory and Clinics in 1962–1982”. The inscription LIETUVOS MOKSLAS (“Lithuanian Science”) runs in a semi-circle around it.