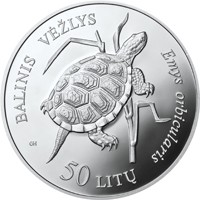 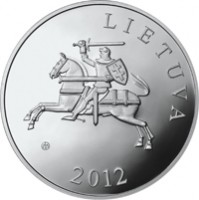 The obverse of the coin carries an image of the Coat of Arms of the Republic of Lithuania (Vytis) in the centre. The inscriptions LIETUVA and 2012 are arranged in a semicircle around it. Also featured on the coin is the mintmark of the Lithuanian Mint.

The reverse of the coin features a stylised pond turtle included in the Red Data Book of Lithuania. The inscriptions BALINIS VĖŽLYS ("pond turtle"), Emys orbicularis, and 50 LITŲ (50 litas) are arranged in a semicircle. The mark of the designer, GK, is also featured on the coin.

On the edge of the coin: LIETUVOS GAMTA (LITHUANIAN NATURE).