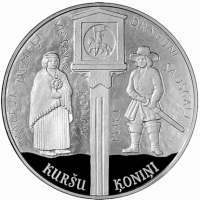 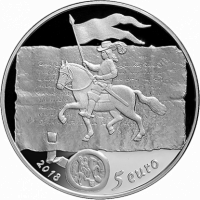 The edge bears the inscriptions LATVIJAS BANKA and LATVIJAS REPUBLIKA, separated by rhombic dots.
A group of people, united by a social tradition, is an essential part of a strong social structure. One of such historically developed social groups was the Curonian kings (Latvian: kuršu ķoniņi; German: Kurische Könige).
In 1230, an agreement concluded between king Lamekin (Lammekinus Rex), representing most of the Curonians, and an authorised representative of a legate of the Roman Pope established that the Curonians had to take part in battles against pagans; they had the right to be free as long as they remained Catholics. The agreement was short-lived as the religious powers and the influence and power of the Livonian Order tended to change; however, the tradition of freedom was established. The title of the Curonian kings was confirmed in writing for the first time to Peniķis in the fief document only in 1504, but the first such document had been issued to Tontegode already in 1320. Curonian kings were the natives of Courland living in seven free villages of Ķoniņi, Kalēji, Pliķi and Ziemeļiin Turlava parish, Dragūniin Rumba parsih, Viesalgiin Snēpele parish and Sausgaļiin Padure parish. As vassals they received land and privileges from the Livonian order.
Curonian kings had the duty to participate in battles with their horses and weapons defending the Livonian Order. They also became messengers, interpreters, secretaries, carpenters, blacksmiths and other craftsmen, and were exempt from corvee and duties. Curonian kings cultivated land by themselves or with the help of their farm-hands, and the land was inherited by their sons.
Even in difficult times Curonian kings managed to retain their personal freedom and independence. During the period of the Duchy of Courland and Semigallia (1561–1795) the rights of the Curonian kings were affected, as the unlimited property rights of vassals to the land were not applied to them, and in the 17th century they were not recognised as matriculated landlords; nevertheless, they retained their rights to go to court and hunting rights pertaining to landlords. The tenacity of the Curonian kings to defend their independence was demonstrated in legal proceedings lasting for years. Several times the court acknowledged the fact that the fief of Curonian kings was not the same as that of peasants and the peasant duties and corvees could not be imposed on it: the erstwhile granted hunting rights, fishing rights, bee-keeping rights and right to have a mill, and specifically the right to have a coat of arms and exemption from taxes made the Curonian kings actually equal to the knights.
A smoking pipe with silver decorations belonging to the Peniķi from the village of Ķoniņciems, the grand saddle with the star ornament, the protecting signs and the ornament of the Sun: these are all symbols and signs that have not been lost through centuries. The coats of arms featured on the seals of the villages and adorning the stained-glass windows of the Lipaiķi Church, just like the fief documents symbolised the right to retain the status of a free person and owner of land from generation to generation. The coats of arms of Ķoniņciems featuring a rider on a horse, with a feather in his hat, a sword at his side and carrying a banner is a vivid evidence of military service: this coat of arms also decorated the Peniķi column, a symbol of the historical self-confidence of the Curonian kings.
To commemorate this extraordinary history, Latvijas Banka is dedicating a collector coin to Curonian kings.
За период с 2018-08-19 по 2022-01-19 монета подорожала на 3%