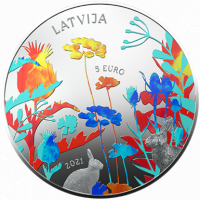 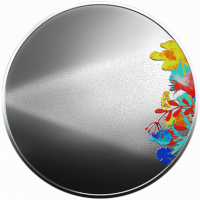 Obverse
A motif of plants in colour print is depicted to the right. A beam of light, with a different degree of frosting, is featured to the left of it.
Reverse
A motif of meadow plants in colour print, with two hares at the bottom of the coin. Inscriptions: LATVIJA is semi-circled along the upper edge of the obverse; 5 EURO is placed slightly above the centre to the right; and 2021 is semi-circled at the bottom left, above the hare.
Edge
Plain.
The difference between a miracle and everyday life lies in one’s capability to perceive. An observant person would see a miracle in the smallest of things, while a flowering meadow would become a fairy tale kingdom. You just need a bit of light to crack the darkness of monotony, and this light is imagination.
The Miracle Coin invites you to look at the world in the light of imagination letting it show us the way to miracles and hope. The central image of the coin is a beam of light, a bright point growing wider and revealing a new world to the viewer: it emerges as a colourful motif of plants.
It is imagination that even in the darkest night lets us see the extraordinary and spot and find the light in the darkness, the miraculous in the prose of life.
The world discovered by imagination is Latvia’s wonderful nature. It is a flowering meadow where we also find two of its inhabitants: the white hare (Lepus timidus) and the grey hare (Lepus europaeus). These creatures symbolise agility, wit, fertility and magical power.
The coin is like a light, a guiding lantern showing the way, a miracle you can carry in your pocket, reminding us of the power of imagination and hope.