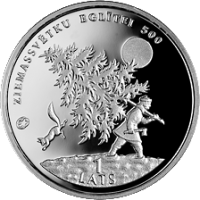 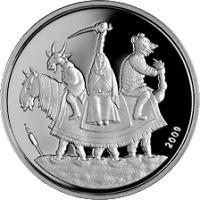 A man carrying a small fir-tree, a squirrel and a shining moon are in the centre of the coin. The common logo of the "European Heritage", the commemorative coin programme of the European Union, together with the inscription ZIEMASSVĒTKU EGLĪTEI 500 (500th Anniversary of Christmas Tree) are arranged in a semicircle on the left above. The numeral 1 and the inscription LATS are placed at the bottom part of the coin.

Mummers in traditional masks are depicted in the centre of the coin; the year 2009, arranged in a semicircle, is inscribed at the bottom on the right-hand side.

Among the many symbols cherished by humans, there is one held particularly dear by millions. It is the Christmas tree whose fragrance, beauty and serenity are beheld in early childhood and not forgotten for the rest of one's life. Every December, as the winter solstice and Christ's birthday approach, these trees are put up in city squares, they are used to adorn shop windows and work spaces, it is given the place of honour in people's houses. The Christmas tree helps to bring families together, it provides solace for the lonely, and makes the happy even happier.

Honouring the Christmas tree, we adorn it with colourful decorations, ribbons, and glitter, we light candles on its branches. Underneath we put presents for children, friends and family. It is celebrated with poetry, songs, and dances. And those gathered around it feel blessed with peace, love, and good thoughts.

But where does the Christmas tree tradition come from? After all, the palm frond is associated with Christ's native land. It is St. Francis of Assisi who apparently made a Nativity scene in a forest in 1222 and put lighted candles in the branches of nearby fir trees. The first ever Christmas tree in Riga, adorned with flowers, appeared at a Christmas season street carnival organised by the Blackhead brotherhood and was burnt in 1510 before Shrove Tuesday. Saying good-bye to the current year and seeing in the new one in Latvia has elements of both pagan Latvian and Christian traditions. The old solstice rituals with their masquerades have also centred around the fir tree whereas in Christianity this tree symbolises the tree of knowledge in the Garden of Eden and Christ's gift of eternal life, but the lit candles in the tree are a reflection of the light Christ brought to the world of darkness.

In the Christian world, the Christmas tree tradition first spread in the German lands: as early as the beginning of the 17th century it was a custom to bring home a fir tree at Christmas and decorate it with paper roses and apples. Only in the 19th century this tradition took hold in Great Britain and afterwards in the United States and elsewhere.

To many Christmas tree is something more than just a ritual object or a decoration: it is a symbol of vitality and rebirth, of uniting spiritual energy, of peace and brotherly love. These same ideas have motivated the Bank of Latvia to issue a special coin honouring the Christmas tree.
За период с 2012-12-29 по 2022-11-30 монета подорожала на 39%