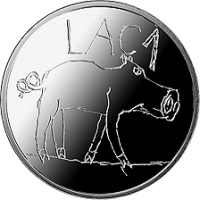 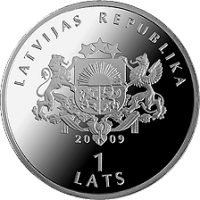 This child-like fascination with the pig finds its expression in Latvian fine arts. The prominent Latvian painters Gederts Eliass and Boriss Berzins often depicted swine-related events in their works, making a valuable contribution to the genre; social posters created by Juris Dimiters often feature the pig digging up and exposing important social problems; and the snout of the pig's sculpture by Teodors Zalkalns exhibited at the Latvian National Museum of Art has been rubbed smooth by several generations of Latvian children.
За период с 2012-12-29 по 2022-12-07 монета подорожала на 47%