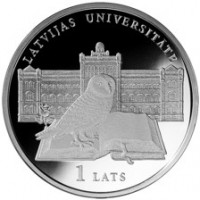 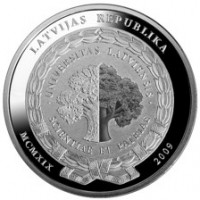 The reverse features the main building of the University of Latvia in the centre, with an owl, the symbol of wisdom, sitting on books in the foreground and a rose, a dedication to the beautiful female students, behind the owl. The semicircular inscription LATVIJAS UNIVERSITĀTE is arranged at the top and the inscription 1 LATS at the bottom of the reverse.

The words VIVAT, CRESCAT and FLOREAT, separated by rhombic dots.

Latvia is a country of students. It ranks second in the world by the number of students per 10 thousand inhabitants. The special status of the University is implicit in its very name, for usually universities are not named after the country of their location. The University is only a year younger than the state itself, and, to quote Janis Stradins, historian of science and Member of the Latvian Academy of Sciences, "the founding of the University presented an opportunity for Latvian scientists and practitioners scattered all over the world to feel united, raise a new generation of Latvian scientists, and develop scientific terminology in a variety of disciplines."

The University of Latvia has managed to enhance its academic spirit and raise its intellectual potential despite the aftermath of World War II and the political and ideological repressions that followed. It is the only classical university in Latvia and the country's largest higher educational establishment, with 23 thousand students attending faculties that offer study programmes in natural sciences, humanities and social sciences. The university provides academic and professional knowledge and encourages students to develop analytical thinking and understanding of various processes.

The University of Latvia is evolving into a research centre that is sure to take its place among the leading European universities. It is well in line with the plans of the European Union to increase the global competitiveness of European researchers. The attainment of this goal is based on a solid foundation as the University of Latvia incorporates over 20 research institutes. It was here, for instance, that, led by Dr. Phys. Agris Gailitis, the Earth's magnetic field was demonstrated experimentally for the first time in history.

In the 21st century, the University of Latvia continues its existence as an academically strong institution of higher learning that is also rich in tradition. It is sure to become Alma Mater for many young and inquisitive minds in the future.
За период с 2012-12-29 по 2022-12-06 монета подорожала на 11%