Gifts of the Forest 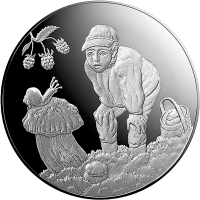 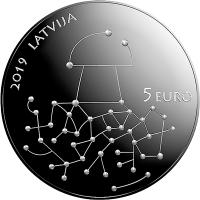 OBVERSE
A stylised mushroom with mycelium is depicted in the centre. The inscription of the year 2019 and LATVIJA is arranged in a semicircle along the edge in the left upper part. The inscription 5 EURO is placed in the middle on the right side.
REVERSE
A drawing of a mushroom picker with a basket, a bolete with a snail on it and a small bolete in the moss is featured on the reverse. A bunch of raspberries is depicted at the left upper part of the reverse.
The translation of the word "mushrooms" in Latin (Fungi syn. Mycota) evokes associations with a poetic world of nature, and the word "mycology" or the science about mushrooms is also derived from it. Mushrooms is an old and large group of widespread organisms playing an important role in nature: many wild animals use them as their food, while worms of insects live in the fruit bodies of mushrooms.
The mushroom-picking skills have already been praised in Latvian folk songs. Grateful collection of the gifts of nature, both mushrooms and wild berries, is an integral part of the everyday life traditions and the ethnic identity of Latvians. It is a special summer and autumn ritual in the sanctuary of nature; it also resembles an instinct of a diligent squirrel who collects supplies for winter. Besides, there is a belief that a lot of mushrooms in the woods in autumn is a sign of poor grain harvest next year. Collecting of this valuable and tasty supplement to the daily meals, found during the walks in the meadows, marshlands and forests, serves as a mental and physical relaxation exercise or restart. Picking mushrooms is a widespread hobby also among Lithuanians and Estonians as well as most of other East Europeans, Finns, Swedes and Norwegians; it is quite popular also in the rest of Europe, North America, Australia and some parts of Asia.
At the same time, in many highly civilised and nature-alienated parts of the world mushroom picking has been substituted by shopping in supermarkets with an unchanging supply of cultivated white mushrooms, while natural picking of mushrooms is strictly regulated. Most of European countries, though, regulate only selling of wild mushrooms rather than private consumption. Nordic countries have common guidelines with respect to mushrooms. In Norway, the collected mushrooms can be examined by a mushroom inspector who checks whether all of them are edible. Italy has introduced a mushroom picking licence, with a limited amount of mushrooms to be picked and time to be spent in the wood. It is prohibited to pick mushrooms in the Netherlands, while in France one might even be imprisoned if the limited amount is exceeded. Therefore Latvians willing to pick mushrooms abroad should learn the customs and rules with respect to this activity in the respective country beforehand.
There are over 70 thousand species of mushrooms documented in literature, but their classification has not been completed yet. In Latvia, more than four thousand species of mushrooms have been identified, including 51 protected and 33 poisonous species. Distribution of hallucinogenic mushrooms is prohibited by law. Approximately 270 mushroom species are edible, but mushroom pickers usually prefer 20–30 of them. Hard-core mushroom snobs take only penny buns and other edible boletes, chanterelles and saffron milkcaps, leaving russulas, honey agarics and ugly milkcaps to others. In July and August, true gourmets look for parasol mushrooms with the flavour of hazelnuts and enjoy them raw.
За период с 2019-10-18 по 2023-02-04 монета подорожала на 28%