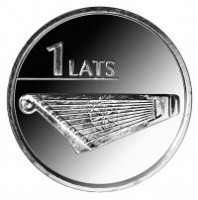 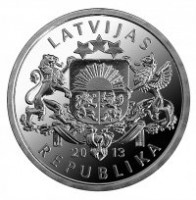 
The coin has been designed by artist Anna Heinrihsone and modelled by sculptor Ligita Franckeviča. The new 1-lats coins were struck at the German mint Staatliche Münze Baden-Württemberg.

For 12 years now, the Bank of Latvia has kept alive the tradition of issuing special 1-lats circulation coins. This tradition is planned to be continued until the time Latvia becomes a fully-fledged member of the Economic and Monetary Union and introduces the euro. A coin with an image of a stork opened the series, and already since 2004, a new coin has been put into circulation twice a year to mark Līgo (or summer solstice) festivities and the Christmas season (details on the full set of special 1-lats coins are available at here). Therefore, should Latvia on 9 July receive an invitation by the euro area countries for the euro changeover in January 2014, another special 1-lats circulation coin will be put into circulation this autumn.

The kokle is a musical instrument originating with the ancient Balts. The kokle has retained, regained and expanded the circle of its adepts and fans, being reborn, along with other old traditions, in musical groups and individual musicians.

The reverse of the new 1-lats coin features the kokle. The minting year of the new coin (2013) is featured on the obverse, beneath the large coat of arms of the Republic of Latvia. In terms of the edge, size, metal used and weight, there are no other differences vis-á-vis the other 1-lats circulation coins.

The total circulation of the coin is one million, and, like all other special 1-lats circulation coins, it will not be supplemented.

It should be noted that the tradition of issuing special circulations coins exists also in the euro area where each country has the right to issue two commemorative (circulation) coins with the denomination of two euro on an annual basis; these coins are legal tender in all euro area countries. Each respective euro area country is responsible for the design and issue of the above coins.
За период с 2013-06-10 по 2022-03-28 монета подорожала на 112%