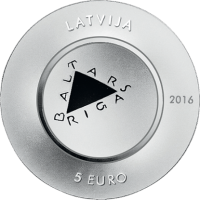 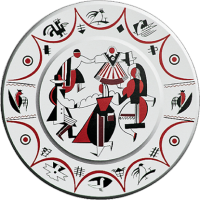 
Obverse
The graphic sign of "Baltars" is placed in the centre of the obverse. It is semi-circled by the name LATVIJA and the inscription 5 EURO at the top and bottom respectively, with the year 2016 featured on the right.

Reverse
The reverse shows the reproduction of plate "Dance" by Romans Suta (1927); the coin is struck in the shape of a flat plate.

One of the greatest art treasures in the Latvian Cultural Canon is the impressive achievements of "Baltars", the workshop where fine china was artistically painted in the 1920s. "Baltars" resulted from the idea of the Latvian painter, graphic artist and composition virtuoso Romans Suta (1896–1944) to create a cultural milieu corresponding to the era of modernism and its language of form. His intent mostly focused on interior design and applied arts where decorative ceramics was supposed to work as a peculiar accent of functionalist and constructivist aesthetics and ideology.

To bring this idea to fruition, the society "Baltars" (from Latin ars Baltica – Baltic art) was established and registered on 1 February 1925, with the production unit installed at 23 Lāčplēša Street in Riga. Journalist Austra Ozoliņa-Krauze (1890–1941), who also lent financial support to "Baltars", generously allowed it to have a ceramic shop, a salon for exhibiting and selling the porcelain and, later, a painting studio in her property. The creative core of the workshop was Romans Suta together with his wife painter Aleksandra Beļcova (1892–1981), the virtuoso of Latvian graphic art Sigismunds Vidbergs (1890–1970) and, occasionally, painters Erasts Šveics (1895–1992) and Lūcija Kuršinska (1894–1976).

At "Baltars" workshop, such top quality art objects as decorated porcelain plates and sometimes vases were made. Their outstanding quality was not revealed in the emphatically simple forms of the china but in its lavish decorations. Usually these were compositions involving one or more figures to convey a message; sometimes still life was interpreted in a Cubist manner, thus continuing the modernist expression topical in Western Europe and gaining popularity in Latvian painting and graphic art. At the same time, the imaginative forms, impressive as they may be, do not hide the pride of Latvianness. Painted porcelain objects of "Baltars" were generously imbued with Cubist reflections, visual composition so typical for Constructivism, and interconnections in tune with Art Deco. Their expressive decorative and monumental qualities were crucially reinforced by the strikingly bright and highly contrasted use of colours, the emphatic interpretation of compositions on a flat surface, and the ornamental organisation of individual elements.

The plots of the paintings were those of the 1920s Romanticism. Dance parties or masked carnivals, representing human joy, poetic nostalgia and even mystery, were among the most popular themes. In many of the paintings the Latvian identity is revealed in the depiction of festive traditions, wedding polkas, national costumes and, on occasion, a historical or social subject matter.

The artists would sketch decorative patterns first with watercolour and gouache on paper. The technologist Dmitry Abrosimov took the responsibility for the end product – the painting on the porcelain after firing in the kiln. Abrosimov had amassed rich experience working at M. Kuznetsov porcelain factories. Direct authorial work, decorations hand painted with a pen on the china, was created only by Sigismunds Vidbergs.

The high artistic level of "Baltars" was recognised, and, as early as 1925, it fetched three medals at International Decorative Arts Exhibition in Paris. They were gold medals for Sigismunds Vidbergs' composition of plates and Dmitry Abrosimov's technical solutions, and a bronze for Romans Suta's plate compositions. Works from the "Baltars" collections were purchased even by the National Museum of Ceramics at Sèvres. Unfortunately, the high prices dictated by production costs and unwillingness to compromise as far as aesthetics was concerned did not increase sales incomes, and on 1 July 1928 "Baltars" ceased functioning.

The masterpieces of decorative art made at "Baltars" matched the quality of the highest achievements of Art Deco and have become the pride of Latvian national culture. Latvijas Banka honours their cultural and historical significance by issuing a collector coin with a reproduction of the design for the plate "Dance" (author of the composition was Romans Suta; 1927).