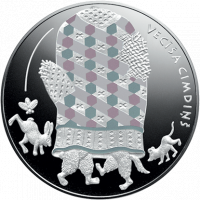 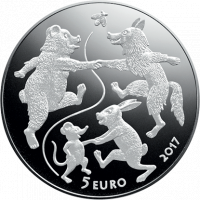 Obverse
A patterned mitten, with the lower body parts of a bear and a wolf protruding from it, is placed in the centre of the obverse. On the left, a fly and a hare are featured, while the image of a mouse is shown on the right side. The inscription VECĪŠA CIMDIŅŠ is semi-circled to the right from the mitten.
Reverse
The reverse shows animals – a bear, a wolf, a mouse and a hare – holding their paws and happily dancing, while a fly is fluttering in between them. The bottom part features the inscriptions 5 EURO and the year 2017.
Edge
The inscriptions "LATVIJAS BANKA" and "LATVIJAS REPUBLIKA" are separated by rhombic dots.
The Latvian folklore is a treasure trove of never ending folk wisdom. It offers words of advice and admonition that preserve their relevance across ages and centuries. The words of folk wisdom are unique, transcendental and of universally human nature. The message imparted by the Latvian folk tale about an old man and his mitten is subtle, yet it continues to warm all human hearts.
Like almost all fairy tales, this one also brings us back to olden days. "Once upon a time, there lived an old man. On a cold winter day, he went to the forest to cut firewood. He wanted to light his pipe and was looking for it, tobacco and lighter in his pocket. While doing so, he lost one of his mittens." Lost is not lost, for someone else finds it. The mitten becomes a cosy shelter on a cold winter day for a queen of flies, a squeaking little mouse, a white-tailed rabbit, a short-eared wolf and even a lumbering bear. Nobody is refused shelter, and all the animals wish to join dancing.
This strong unity of theirs is suddenly under a threat. In this tale, the rooster's morning song frightens the animals, causes disaster and ruins their unity. All the friends get so frightened that they jump out of the mitten and run to escape so vigorously that the mitten bursts. There is no news afterwards about the fly living in the king's castle, the mouse feeding in the potato cellar, the rabbit hiding in the oats, the wolf resting in the bushes, and the bear lumbering in the forest. But one thing is certain: up to this day, the old man is walking with only one mitten on.
This fairy tale, like all others, has its own edification delivered in a seemingly funny and humorous yet sad manner. The lesson of worldly wisdom is first meant for children, the main audience of fairy tales. The story of wise living reaches them in a metaphorical form. Every human being must learn to include all living things in the circle of their respect, compassion and empathy, to lend a helping hand to the miserable, to support and to assist. These are the true values that have underpinned the human relationship and helped people survive wars, crises and other calamities brought down on them. The old man's mitten figures here as a symbol of wisdom and sagacity, an expression of good sense and involvement. These qualities conjure up a cosy and welcoming atmosphere, rescue in an evil hour those who are wise enough to unite. That is why, though squeezed and cramped in the mitten, the bear, the wolf, the rabbit, the mouse and the fly can dance in perfect unison. They are brought together, by fate, to become a part of the mighty tree of great reality that is called life.
This fairy tale can, however, be extended to the world of grown-ups as well. It being so versatile and complex, do we not engage in role playing sometimes representing, though only symbolically, a bear, a wolf, a rabbit, a mouse or a fly? And how destructive the lack of unanimity turns out when the rooster raises panic and commotion by its crowing in the morning! When people are not united in their actions and activities, when their sense of unity gets lost somewhere, and when their daily routine makes them forget about compassion, solicitude and kindness, the old man's unmendable mitten is all that is left behind.
Sad as the story is, Latvijas Banka presents its instructive message by optimistic, funny and even humorous images on the collector coin. The joy of reality and being is dominant. Put aside sadness, let's dance! The Latvian nation has often been dancing down the road to light and enlightenment. Let the old man's mitten struck in silver give warmth to souls and minds of both children and adults! Let this coin of wisdom bring joy to everybody who will hold it!
За период с 2017-03-28 по 2023-02-07 монета подорожала на 28%