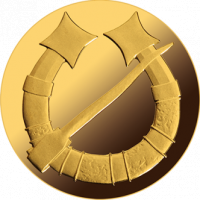 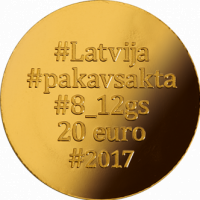 A stylised image of a 12th century horseshoe fibula with star-shaped ends.
Edge

Plain.
Smith hammers in the heaven,
Coal bursts into the Daugava.
He forges a brooch for the Sun's daughter
And a sword for the God's son.
(Latvian folksong)
The coin replicating a horseshoe fibula with star-shaped ends continues the series of euro gold collector coins dedicated to Latvia's centenary. The image is based on a 12th century horseshoe fibula cast in bronze which, together with other artefacts, was found in cremation graves of Upīši ancient burial field located in Gramzda civil parish. It was traditionally worn by Couronian men.
Horseshoe fibula was the most popular type of ancient brooches and has been used on the territory of contemporary Latvia for almost 1 000 years. The most ancient brooches of the kind, based on similar brooches coming from the Roman imperial provinces, were also crafted and worn in the East Baltic already in the 3rd–5th century. Luxury brooches adorned with coloured enamel were expensive and rare. Only some samples of those have been found in Latvia.
The development of local horseshoe fibulae in the East Baltic began at the turn of the 7th and 8th centuries when initially simple horseshoe fibulae with rolled-up ends became increasingly more popular and where used to fasten and adorn shirts and outdoor clothes. They became a typical adornment on the territory of Latvia in the Late Iron Age (9th–12th century) when they were cast in bronze, iron and silver. Horseshoe fibulae were used by both men and women.
In the 10th–13th century, horseshoe fibulae with faceted, star-shaped, club-shaped, poppy-head, beast-head and ball ends were also used alongside with horseshoe fibulae with rolled-up ends. The horseshoe bows of the fibulae could also be braided, plaited or adorned with geometric ornaments. The ends of the most splendid brooches were adorned with thin ornamented silver sheets (silver plating), whereas the most modest ones were made of a simple bronze coil. In the Late Iron Age, they were used by all nationalities residing on the territory of the contemporary Latvia, although each preferred a different form. For example, the Livs mostly used horseshoe fibulae with poppy-head ends, whereas the Couronians preferred horseshoe fibulae with beast-head and star-shaped ends.
Horseshoe fibula remained popular also in the Livonian period (13th–16th century), despite the growing use of various ring fibula shapes originating in Western Europe. At the same time, new decorative end-forms of horseshoe fibulae associated with specific symbols were also developed (e.g. fibulae with lily or disc ends). Only at the end of the 17th century horseshoe fibulae were completely replaced by ring fibulae.
The second coin in the Gold Brooches series of three gold collector coins is dedicated to horseshoe fibulae. A coin dedicated to disc fibulae was released in 2016, whereas a coin replicating a bubble fibula will conclude the series in 2018.
За период с 2017-09-01 по 2022-06-27 монета подорожала на 86%