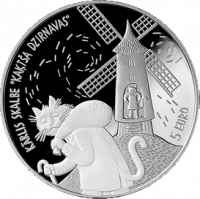 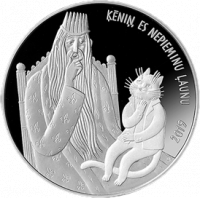 
A public opinion poll concerning the nation's most favourite literary works in Latvia came up with a seemingly unexpected answer. The majority voted for a fairy tale. It was a literary fairy tale "Cat's Mill" by Latvian poet, prose-writer and politician Kārlis Skalbe (1879–1945). People love this tale for its benevolence which is so close to the Latvian mentality and folk song ideals as well as the writer's talent to evoke the deepest human emotions. The cat's mill has filled the heart and soul of nearly every Latvian with warm compassion through some tear therapy and made countless readers of many generations ambassadors of goodness for life.

The fairy tale features a juxtaposition of the good and the evil. The central image of the tale and a symbol of the good is the White Cat owning a mill. The fairy tale opens with a romantic description of well-being and prosperity. "Once upon a time, when the years were good, there was a cat who owned a mill. The mill worked day and night: prrr, prrrup, prrr... (..) The miller himself was walking around in a white coat and counting the sacks of nuts and almonds."

The vile and rich Black Cat, with devils as servants, is the White Cat's opponent.  He drives the White Cat into despair and poverty. The White Cat suffers all kinds of injustice, pain, wrongdoing as well as the bitter fate of a homeless vagabond, until it almost seems that the evil has triumphed and has taken over the whole universe and the poor Cat has been completely denied and abandoned by everybody.

Yet, as it usually happens in fairy tales, the goodness prevails again. The sad path of the White Cat eventually crosses that of a King compassionately commiserating all the torment and pain of the world. The Cat can finally share his unhappy life experience with somebody who is a good listener and has a kind heart. The King is ready to use his powers and severely punish all wrongdoers, yet the Cat finds forgiveness in his heart for all of them. "My King, I bear no grudge against them. These little children are so curious. They don't know hurt yet. They want to see pain and rejoice to see the cat suffering. Life will soon injure their young souls and they will learn. Maybe we shall even become good friends."

The moral of the fairy tale is: do not spread evil and learn to forgive. Other values taught by this fairy tale are honesty, diligence and love. The fairy tale's multi-faceted message is useful at any age.

This literary masterpiece by Kārlis Skalbe was created in 1913, when his 15 months confinement for supporting the revolution of 1905 in a magazine, where he was both the founder and editor, came to an end. The magazine was closed and a case was filed against Kārlis Skalbe. He tried to escape from it by spending five years in emigration in Finland, Switzerland and Norway. In 1909, however, he returned to Riga. Until his arrest in 1911, he lived in Vecmīlgrāvis, in Burtnieki House built by the outstanding Latvian industrialist and philanthropist Augusts Dombrovskis (1845–1927).

"Cat's Mill" is one of the nine fairy tales of the "Winter Tales" collection by Kārlis Skalbe. Part of them were written while he was in prison. At present, the whole collection has been included in the Latvian Cultural Canon.

"And so it was. The Cat got back his mill. The devils snatched the Black Cat with his money chest and whisked him away to the swamp as they no longer felt safe to live at the mill. And the Cat stood again in front of the mill in his white coat. And the nut grinders and almond grinders were purring again..."