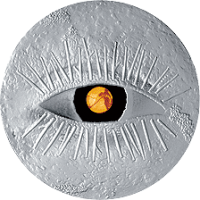 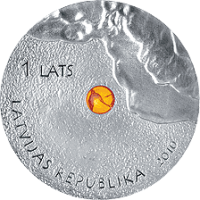 A transparent amber cylinder of appropriate thickness has been set into the centre of the coin. The inscription 1 LATS is placed in the upper left part of the obverse while the upper right part features sea waves. The inscription LATVIJAS REPUBLIKA and year 2010 is arranged in a semi-circle at the bottom.

An eye with an amber pupil is featured in the centre of the reverse.

Forty million years passed, and amber saw a human being for the first time…

Forty million years ago the territory of present-day Latvia looked very much different: there was no Baltic Sea, the climate was subtropical, there were thick coniferous forests, providing shelter to many species of now extinct animals. Among the vegetation, there were the so-called amber pines (Pinus succinifera). If their bark was injured for some reason, these trees oozed a great amount of resin. The resin flowed to the ground, fossilised, and, when many million years later water washed out the ancient bedrock, the waves threw to the shore small pieces of the petrified substance, which resembles frozen drops of honey in sunlight and which we call amber.

Present-day discussions about the preservation of ecosystems and global warming make us aware how fragile and subject to change is our environment. Evidence of change that our surrounding world has experienced is on view everywhere: in ancient river valleys, huge rocks left by glaciers in the middle of fields, or amber that we find in the seaside sand. The human lifespan is negligible compared to amber's but here they both are: together on the shores of the Baltic Sea. In a way, it's almost incredible: how is it possible to determine where the piece of petrified resin will end up millions of years later? How can a tiny speck of it be noticed among millions of grains of sand? Yet this meeting is possible, and at such moments we manage to overcome our being tied to a particular point in time. When we lift the amber to the sun, it once again shines in the hues of prehistoric forests that once covered the territory of Latvia.

This semiprecious stone is one of the first minerals used by the human race. Amber jewellery has been made in Latvia for thousands of years; in the Neolithic settlement in western Kurzeme, Sārnate, there had even been an amber-processing workshop. Jewellery at that time was made both for personal use and as an exchange commodity. The pieces were buttons of various shapes, beads, and pendants; some were carved into mythological figures. The oldest coins found in the Latvian territory came from ancient Rome by way of the so-called Amber Route and were paid for with amber. The routes of such coins and amber have tended to cross many times over the course of history.