600th anniversary of the Grünwald Battle 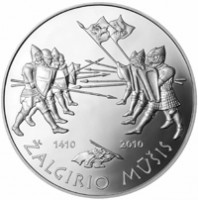 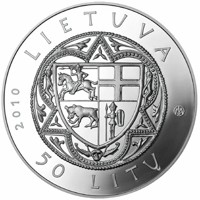 The obverse of the coins features a seal of the head of the state of that time, with the inscriptions LIETUVA (Lithuania), 2010, and 50 LITŲ (50 litas) in a semicircle around it.

On the edge of the coin: stylised 15th century spearheads.