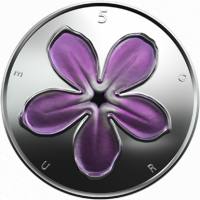 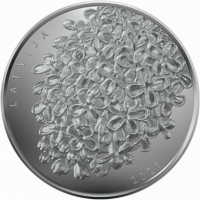 Obverse
A five-petal lilac flower in lilac colour print is featured in the centre of the coin. The numeral 5 is placed above the flower, and an inscription EURO is semi-circled beneath the flower.
Reverse
A lilac panicle, with an inscription LATVIJA arranged in a semicircle above it on the left side, and 2021 semi-circled at the bottom right.
Edge
Plain.
Luck may very well be accidental. Unlike fortune, however, it requires you to grab opportunities when they present themselves. Sometimes, fortune is just a fluke as it simply falls into one's lap without any effort.
Be that as it may, luck is no fluke. A lilac flower with five petals is one of the Latvian symbols of luck. As the local tradition has it, when finding a five-petal flower, one should make a wish and eat the flower or dry it and keep it at hand – between the pages of a book, in the pocket or wallet.
The key is in the knowledge that lucky five-petal flowers are mostly found in ungrafted lilacs. One should, however, bear in mind that one such flower would do the trick. One should not risk "overeating". Lilacs are commonly associated with good luck in love and hope for a bright future. They are variously reflected in fine arts of the second half of the 19th century (Lilacs in a Window by Mary Cassatt; White Lilacs in a Glass Vase by Édouard Manet), the first half of the 20th century (The Lilacs by Mikhail Vrubel; Lilacs by Henri Matisse; Lovers in the Lilacs by Marc Chagall) and the turn of the 20th and 21st centuries (a series of lilac paintings by Latvian artist Īra Rozentāle, 2000–2002).
Canada has issued a gorgeous lilac coin (Celebration of Spring: Lilac Blossoms, 2017) dedicated to spring and love as well as to Isabella Preston, the Canadian "Queen of Ornamental Horticulture". Latvia has its own "Father of Lilacs" – Pēteris Upītis. Back in the day, he created a large selection of lilac hybrids which can still be viewed in the Lilac Garden in Dobele every spring. The common lilac (Syringa vulgaris) is thought to have been introduced to Europe in the mid-16th century when it was brought over from Turkey. It appeared in the territory of the present-day Latvia in the second half of the 18th century: first around manors and later around farmhouses as well. Owing to their fragrance and diversity of colour, lilacs became popular ornamental shrubs in the second half of the 19th century and, particularly, at the beginning of the 20th century. Lilacs have been cultivated in Dobele since the late 1860s when a park with rare tree and plant species, including deep purple lilacs brought from the priest's manor in Lielauce, was created around the priest's manor. Today it is hard to find a place in Latvia without lilacs. Within a few centuries, they have become an important part of Latvia's cultural landscape.
So, the time has come for Latvijas Banka’s lucky lilac coin. Unlike a real five-petal lilac flower, the coin should not be eaten. Instead, it should be given as a gift or kept for oneself so that its owner always holds the energy of luck. It should only be gently held in one's fingertips every now and then to bring luck for yourself, your loved ones and the public at large. If you also hold the chimney-sweep and horseshoe coins in your collection, consider your luck to be threefold!
За период с 2021-11-30 по 2022-11-17 монета подорожала на 44%