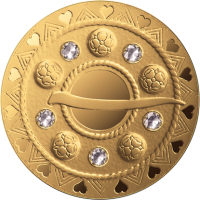 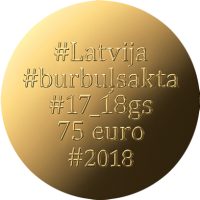 The girl born in the sunshine
Enjoys happiness.
Goddess Laima makes fibulae for her
By immersing them in silver.
(Latvian folksong)
It was in the 17th century that the range of Latvian jewellery was supplemented by a new type of fibulae that gradually emerged from the range of various ring fibulae popular in past centuries. Their circle featured hemispheric elevations or bubbles, which gave the name to the jewellery – the bubble fibulae. The bubbles could be smooth, granular like raspberries or decorated with floral or other ornaments. The circle of bubble fibulae was usually divided into three belts. The ornamental hemispheric elevations were located on the middle belt, which was the broadest one. Decorations in the shape of flowers or monarch crowns could be often found between the elevations, but the tradition of including coloured glass "eyes" in metal holders between the bubbles strengthened as of the beginning of the 18th century. Geometric design, most frequently consisting of zigzag lines, and hearts made in the openwork technique were featured on the outer belts. The most ancient fibulae of this type were found together with silver coins in deposits of the 17th century. Thus, they represented not just ordinary jewellery but also significant value of that time. The 19th century also saw women wear the bubble fibulae, which became an integral part of their national costumes.
The large, luxurious bubble fibulae were made of silver and often they were even gold plated. The bubble fibulae represented one of the most gorgeous jewellery of Latvian women. The names of fibulae owners and the year of their making or the year they were given as a gift were often carved on them. Smaller fibulae could also be made of brass. They were intended for fastening one's shirt and for its decoration. The large fibulae were used to pin shawls together. A special fibula ring resembling a smaller fibula often found its place on the large fibulae pins. The bubble fibulae were common throughout the territory of Latvia, although the way they were decorated and their wearing traditions were slightly different. For instance, it was in South Courland where two or more such fibulae, not just one, were fastened to the shawl. They were placed one on top of the other according to their size and topped with a silk ribbon. Wealthy Latvian female farmers were proud of their luxurious brooches, which were often handed down from generation to generation. Such fibulae have often been preserved by families up to the present day as relics of their ancestors.
The series of euro gold collector coins "Gold Brooches" dedicated to Latvia's centenary is composed of the coin replicating a 3rd–4th century disc fibula issued in 2016, the coin dedicated to a horseshoe fibula minted in 2017 and the coin replicating a bubble fibula which concludes the series in 2018.
За период с 2018-11-08 по 2022-06-30 монета подорожала на 34%