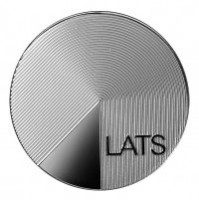 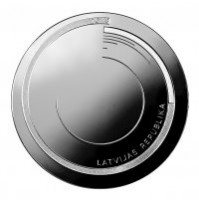 The obverse features a circle symbolising 360 + 5 degrees, including also the time reference point. The year 2013 is placed on the circle at the top. The concentric lines within the circle represent 1 second, 1 minute, 1 hour, 1 day, 1 month and 1 year. The inscription LATVIJAS REPUBLIKA is semi-circled at the bottom.

The reverse features an intricate pattern of lines which turn into circles; the diagram comprises a shiny sector resembling the form of the number 1. The inscription LATS is placed at the lower part of the reverse to the right from the shiny sector.

"What changes, endures". This idea expressed by Rainis in his play "The Golden Horse" over a hundred years ago is more topical today than ever before: Latvia is poised on the threshold of important change marked by its historic accession to the euro area. The 1-lats silver coin entitled "365" puts a symbolic full stop to the era of the renewed lats. This number is particularly noteworthy among others, for it makes one recall the days of the year with their endless diversity of events and the flow of life.

No highly developed society is imaginable without measuring time. The activities at the basis of Baltic culture already stimulated awareness of the flow of time, the change of seasons, and the solar calendar. The authors of Latvian folksongs contemplate the seasons of sowing and reaping, the period of the activity of the dead men's souls, and other cycles rooted in natural phenomena; the seasonal festivities of Easter, Midsummer, Michaelmas and Winter Solstice all find reflection in the folksongs. The rhythms originally dictated by nature are at the foundation of the culture, traditions, mentality, and work and life ethic of the nation.

Time is a measure whereby the rate at which any change takes place is determined. It is also called the fourth dimension. Time characterises the movement of things from the past through the present to the future. To understand what time is, hundreds of scientists have delved into the depths of research, yet answers to the questions why time flows, why it does so in only one direction or if a quantum of time exists have not been found.

The different perceptions of time are also a thing of wonder. Time may stretch endlessly, or it may become the most coveted gift with the value of gold. Man's contemplation of time has been reflected in many dictums like the following: "The time did not exist before the beginning of the universe" (St. Augustine); "The wisest are the most annoyed at the loss of time" (Dante); "Nothing can be longer, since 'tis the measure of eternity; nothing is shorter, since there is time always wanting to accomplish what we aim at" (Voltaire).

To the coins – carriers of emotional, poetic, narrative or metaphoric messages – issued by Latvijas Banka is now added a coin that reflects the intellectual and the scientific. The geometrical abstraction of the graphic design can be likened to the ascetic image of a scientific diagram. The circle on the obverse of the coin symbolises 360 + 5 degrees, including the time reference. From there, one second, one minute, one hour, one day, one month and one year begin their course; the linear graphic symbols of all of these units of time have been arranged in concentric lines. Each of them has its importance in the pulse and flow of existence. Their totality is used to measure the lifespan of an individual, the history of mankind, and the length of the life of our planet and the universe.

An interesting rebus of fractions has been encoded in the coin, based on the number 4: seasons, points on the compass, quarters. The ¾ likewise has its meaning: a dance rhythm, an angle of a portrait, the last step before the finish line, the academic hour, or 45 half-time minutes of a football match. On the reverse, the magic of numbers is transformed into the symbol for one lats that is treated like a shiny sector in the diagram of a circle. The intricate pattern of lines, resembling our fingerprints, turn into shiny circles forming the aura of time.

The coin "365" is also a reminder of the importance of education and mind, which will be of use to any poetically inclined Latvian in today's pragmatic world. The dominant of reason and intellect is being reinforced as Latvia becomes ever deeper integrated with the common space and time of the European Union.
За период с 2013-11-13 по 2023-02-04 монета подорожала на 14%