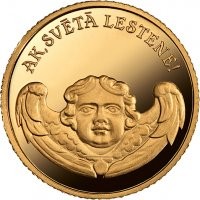 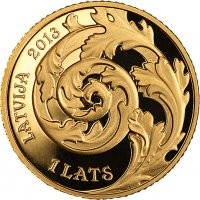 An acanthus leaf design from the side decor of the altar of the Lestene Church is featured in the centre, with the inscriptions LATVIJA 2013 on the left and 1 LATS in its lower part.

The head of an angel from the church altar occupies the lower part of the reverse, with the inscription AK, SVĒTĀ LESTENE! (OH, HOLY LESTENE!) semi-circled above it.

The Lestene Church was once the most spectacular historic religious building in the Latvian countryside. In 1704–1709, the famous Nicolaus Söffrens, Jr., wood carver of the Duke of Courland's Ventspils shipyard, adorned the church with carvings ordered by the owner of the Lestene estate Karl Friedrich von Firks. One of the 15 masterpieces of visual art in the Latvian Cultural Canon is the altar of St. Ann's Church in Liepāja carved by Söffrens, but in Lestene he made a whole set: pulpit, confessional, organ case, pews and patrons' box. The organ, made in 1707 by the most outstanding organ builder of the Baroque period in Latvia Cornelius Rahneus, was concealed behind a magnificent case where, while the organ was played, the carved figures were moved by a mechanism: angels played musical instruments, beating the timpanos and fluttering their wings; King David was the conductor, and, above it all, a great eagle was flapping its wings. The combination of art, spirituality and music at the church had such an impact that churchgoers sometimes dropped to their knees calling out: "Oh, holy Lestene!" This expression of the utmost in surprise, excitement and elation connected to the Lestene Church has become part of Latvian oral tradition.

From the outside, the Lestene Church is stark and simple as are all ancient churches in Courland, but inside the wood carvings echoed the rich Baroque elements: the Corinthian order pilasters, gilded consoles, rosettes and angels' heads. Almost to the very end of World War II everything had survived in its original form, even the hourglass on the edge of the pulpit had lost none of its glass bulbs over the centuries. But then came disastrous times. In February 1945, Soviet artillery shelling caused the church spire to burn down and the altar was damaged. In the post-war period, the church was systematically pillaged and demolished but in 1967 it was turned into a drying kiln. Owing to artist Jurģis Skulme, the sculptures were saved, but in 1964 the surviving carved furnishings were taken to the Tukums Museum. In 1973, all the parts of the ensemble were gathered in the Rundāle Palace Museum where, as of 1983, they could be seen in a partially restored form.

Since 2002, the Evangelical Lutheran parish of Lestene has been gradually repairing the church building, which yet has to be completed, including moving the carved furnishings back to the church and restoring them. As of 2012, the confessional has returned to the church and the Baroque pews have been refurbished. All this work is being financed through donations and small project funding. This coin, however, is not a memorial to a lost masterpiece: it is an appeal to the public and each person individually to help Latvia regain its most outstanding Baroque church and heal the deep wounds caused in Lestene by the war and Soviet power.

The coin features two altar elements: the head of an angel and an acanthus leaf design in the side decor of the altar. This gold coin serves as a reminder of the outstanding artistic value of the Lestene Church and symbolically reflects the magnificence of Söffrens's gilded wood carvings.
За период с 2013-09-30 по 2023-02-04 монета подорожала на 41%