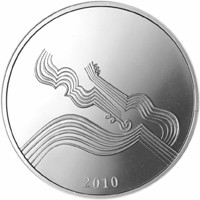 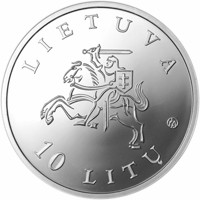 The obverse of the coin carries an image of the Coat of Arms of the Republic of Lithuania (Vytis) in the centre. The inscriptions LIETUVA and 10 LITŲ (10 Litas) are arranged in a semicircle around it.

The reverse of the coin features a stylised contour composition of music instruments depicted using staves and other music symbols. The coin’s year of issue, 2010, is inscribed at the bottom.

On the edge of the coin: LIETUVOS KULTŪRA * MUZIKA (LITHUANIAN CULTURE * MUSIC).