Reconstruction of the Royal Palace of Lithuania 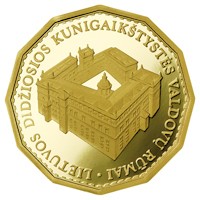 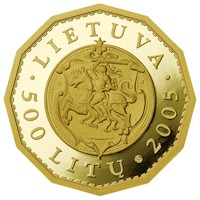 The obverse of the coin carries an image of the Coat of Arms of the Republic of Lithuania (Vytis) in the centre, a stylized version from the 16th c., which is encircled with the inscriptions LIETUVA (Lithuania), 500 LITŲ (500 litas) and 2005.